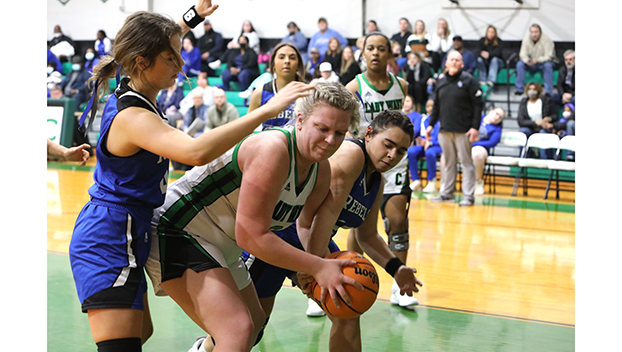 The match-up between district as well as cross-town rivals was anything but a back-and-forth showdown during Senior Night at the Roy Garcia Sr. Gym. For the sixth game in a row, ACCS held its opponent to under 10 points in the first quarter and led Cathedral 15-5 by the quarter’s end.

The second quarter was the most competitive of the four between ACCS and Cathedral. The Rebels outscored the Green Wave 21-15 to take a 36-20 lead into halftime.

“Samuel Merriett stepped up and hit a couple of big 3-pointers for us in the first half,” Freeman said.

The Rebels continued to add to their lead in the second half. They outscored the Green Wave 14-6 in the third quarter and 18-6 in the fourth quarter.

With four players scoring in double figures for ACCS, Freeman said he was glad to see the wealth spread around in that fashion instead of just one or two players doing the majority of the scoring. He added that that makes it much tougher for opponents to defend the Rebels.

“Whenever we’re able to spread the scoring around, it makes us tough to guard,” Freeman said. “It gets everyone involved.”

McGruder led the Rebels with 16 points and 14 rebounds while Green finished with 10 points and 12 rebounds. Jamar Kaho Jr. scored 12 points and Tiqi Griffin poured in 11 points.

ACCS (19-4, 7-0) played at district foe Copiah Academy at 7:30 p.m. Friday. Cathedral (no records available) had a couple of district games to round out the week. The Green Wave played at St. Joe Madison Friday at 7:30 before hosting Central Hinds Academy Saturday at 7:30 p.m.

With point guard Maddie Verucchi out of town on a trip, Lady Green Wave head coach Bernita Dunbar had to move Huddy Lees to the post and Lauren Dunbar to the point. The move paid off as Lees led them in scoring with 11 points and came up with some big rebounds.

“She rebounded the ball real well,” coach Dunbar said. “Huddy was able to provide that extra help that we needed in rebounding and putting the ball back up on the offensive rebound.”

“Bella Milligan stepped up for us. We missed some easy ones, but she played well on the offensive boards as well,” Dunbar said.

Dunbar added that the Lady Green Wave continues to play as a team and are relying on each other. She also said that her team was able to spread the ball around so it can have multiple players score, noting that everyone who played scored.

As for the team’s defensive effort, Dunbar said, “I was pleased with them defensively. We didn’t move as well as we could have, which led to us getting in foul trouble early. I was pleased that we were able to overcome that, but we should have kept them off the foul line. That stops the clock, too.”

Even with the early foul trouble, Cathedral led ACCS 11-6 after one quarter of play. The second quarter proved to be the real difference as the Lady Green Wave outscored the Lady Rebels 16-9 for a 27-15 halftime lead. After each team scored four points in the third quarter, ACCS tried to put up a late-game comeback, but an 11-6 advantage in the fourth quarter was not enough.

McKenzie Campbell led ACCS with a game-high 13 points while Georgia Martin finished with seven points and Maddie Campbell chipped in with six points.

Despite the loss, Lady Rebels head coach Richy Spears said he was pleased with the effort that they showed against a good Lady Green Wave team.

ACCS (4-14, 1-6) hit the road to take on district opponent Copiah Academy at 6 p.m. Friday. Cathedral (8-11, 4-2) took on St. Joe Madison on the road in a district match-up at 6 p.m. Friday before playing host to Central Hinds Academy in another key district contest at 6 p.m. Saturday.