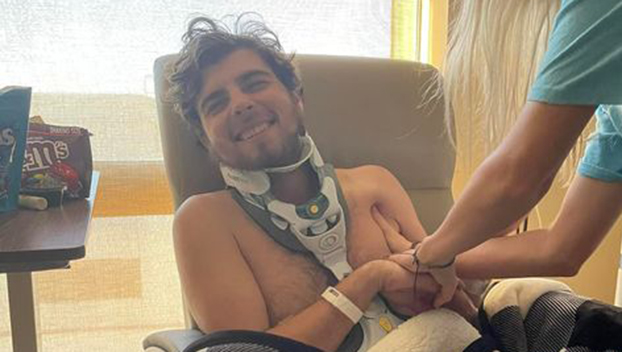 Vidalia native Dylan LaPrairie, 18, is sitting up and smiling while hospitalized from a single-vehicle accident on Jan. 8. (Submitted Photo)

NATCHEZ — A Vidalia teen and Adams County Christian School graduate Dylan LaPrairie is expected to fully recover from brain and spinal injuries he received in a Jan. 8 single-vehicle accident on Hutchins Landing Road near U.S. 61 South.

LaPrairie was a passenger in the vehicle. The driver, 20-year-old Landon Thompson, and another teen passenger who is a juvenile, had minor injuries.

His mother, Leah Roberts, said her son had three breaks in his spine in the C4, T4 and T5 vertebrae and had several spots of bleeding in his brain. Roberts said the doctors later discovered he had a broken collar bone as well that they hadn’t noticed until two days after he was admitted to Rapides Regional Medical Center in Alexandria, Louisiana, where he remains hospitalized.

They expect the bone breaks to recover on their own with a neck brace without requiring surgery.

LaPrairie, age 18, graduated from Adams County Christian School last year after transferring from Vidalia. He was a pitcher on the baseball team at ACCS and later worked at Pearl Street Pasta in Natchez.

Roberts said her son’s condition has improved but he has had a few minor setbacks.

LaPrairie would have been moved Monday or Tuesday to Touro Infirmary LCMC Health in New Orleans for rehab but found out he had COVID-19, Roberts said. She added he cannot be moved from the hospital until he recovers from the virus. Once he is moved, Roberts said LaPrairie should be in rehab for three weeks before he can return home.

He has gone from being unconscious on a ventilator for two days to sitting up, walking, talking and laughing with visitors and recognizes everyone, Roberts said.

However, he has a long road to recovery in front of him.

Roberts said LaPrairie has had mood swings from the brain injury and can seem normal one moment and becomes angry the next. He also only remembers bits and pieces of conversations he had a day or moments after having them. However, the doctors believe he will fully regain his short-term memory over time.

“He stays confused because of the brain injury,” she said. “He doesn’t remember anything from the day of the wreck or four days before and he has nightmares. He will never remember the accident. They say it will be about 12-months to recover but do think he will make a full recovery. He is in a lot of pain.”

Roberts said she is grateful for the support her friends and community have shown her family.

“Everyone has been helpful,” she said. “People have brought us food to the hospital. Right now, we’re not out of anything.”

A GoFundMe page was created by friends of LaPrairie and his family to help them with medical expenses. The GoFundMe has raised $2,060 as of Friday.