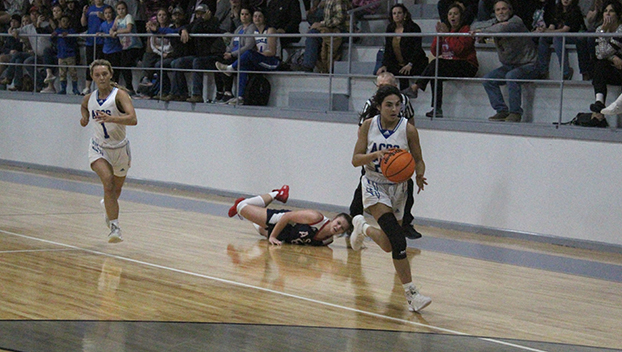 McKenzie Campbell drives to the hoop as an Amite School Center defender falls to the floor. Campbell scored 15 points in the game but it was not enough as AC fell 34-31 Monday night. (Hunter Cloud | The Natchez Democrat)

The game was intense from beginning to end. After one-quarter of play, the Rebels tied 4-4. With 13.3 seconds in the third quarter, Amite pulled away to a 21-16 lead.

Campbell sprung away with the ball for a wide-open layup to cut the game to 21-18. Simultaneously, Georgia Martin was fouled and hit the floor hard. Things started to get ugly as administrators and referees tried to separate the two squads. Referees restored the peace with a technical foul called on each team.

It set up a tight finish to a well-contested basketball game. Campbell said she has to stay focused in a game like that.

“I could feel tension. I felt a lot of pressure. I felt overwhelmed,” Campbell said. “I tune in with our team and what is happening. I try not to worry about what will happen later. I focus on what will help us get some points.”

Going down the stretch, Campbell scored five points in the fourth quarter. She has played basketball since she was in second grade with AYA. By fifth grade, she was scoring a lot of buckets in AYA.

She enjoys the atmosphere of the gym. A defensive player, she is constantly on the move and hustles. Several of her points scored for the Rebels came on breakaway opportunities as she layed it up and in.

Adams County Christian School had a great atmosphere to finish the girl’s game. Brooke Collier hit three threes in the game. One of those long-range shots tied the game up at 31-31 with about two minutes left in the game. AC’s student section picked up the intensity to try and help the team.

Amite managed to win the game as AC missed opportunities to rebound and shoot the ball well from the Charity stripe. As a team, they missed 16 out of their 22 free throws. Campbell said it was a tough loss.

“We have beat them before,” Campbell said. “We came in strong-headed thinking we could beat them again. If we rebounded more, and not fouled as much, we could have won the game.”