EYES ON SCENE: 911 implements new program to prepare responders before they arrive 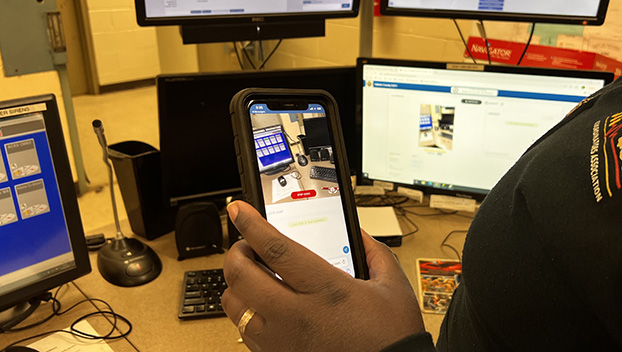 A new program implemented by Adams County E911 allows callers to give dispatchers access to their smartphone's camera and see what they can see. (Sabrina Robertson | The Natchez Democrat)

NATCHEZ — Natchez and Adams County’s E911 service has implemented a new program to help give responders an idea of what they’re walking into before they arrive at the scene of an accident, crime or hazardous situation.

Now, anyone who calls 911 from a smartphone can give 911 permission to access their phone’s camera, so the dispatcher and first responders can see what the caller is seeing in real-time, E911 Director Annette Fells said.

The department started the program called “911eye Emergency Streaming” on a free trial in November. After seeing that it helped, Fells said she was permitted by the Board of Supervisors to purchase the use of it for $11,300 for the first year, after which it is $9,000 each year after. With this, E911 has cloud storage to see and store pictures and video from the caller’s smartphone for up to 30 days and can download whatever images or video might be needed for evidence to build cases, she said.

“It would be very beneficial to us to know what we’re walking into,” he said. “When I heard about it, I got excited and I want to see more citizens utilize it. It’s a game-changer.”

Fells said 911eye does not use or keep any of the callers’ personal information. A text message is sent to the caller’s smartphone with a link and the caller must click on the link to give E911 access. Once they give camera access, E911 sees only what the caller directs their phone’s camera at. After the call, the link is closed and no longer works.

Fells said this program is helpful in situations such as when the caller is not sure of where they are, allowing E911 to see landmarks to better direct the responders to their location, or if the caller has trouble describing a person or object.

In one situation, Fells said a woman called and said she found an object in her garage that she thought might be a grenade.  E911 was able to access her camera to see that it was indeed a grenade, with its pin still intact, and send the appropriate agents to respond.

The caller and E911 can also direct message each other back and forth on the program—a helpful tool if for some reason the caller is not able to remain on the call and speak over the phone.

Fells said she wanted citizens to know that E911 provides this service so they know it is legit and are not afraid to use it.

“As long as a caller is calling us from a smartphone, we can send them a link and we ask them for permission first to get access to their camera,” Fells said. “All we do is get access to their camera. We’re not tapping into their phone to get data or anything like that. We’re only trying to access their camera so that we can see what they are seeing. What that does for us is we can record or take a picture on the scene, which helps protect the citizens and our local law enforcement agents.”