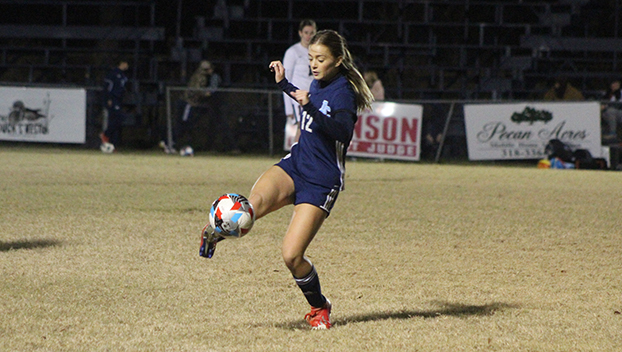 Delta Charter midfielder and captain Chloe Smith said it was weird playing without head coach Christal McGlothin on the sidelines. McGlothin had to FaceTime to watch the game because she was sick. Delta Charter won 3-0 against Rapides Monday night to get back in the win column. (File Photo | The Natchez Democrat)

FERRIDAY — Delta Charter had a rough senior night as the Lady Storm suffered a 7-1 defeat, and the boys lost 8-0 to St. Frederick Friday night. Emma Graves scored the only goal for Delta Charter.

Head coach Christal McGlothin did not have much to say about the loss. St. Frederick was not a better team than the Lady Storm, but they played like the better team Friday night. There are three matches left in the season for Delta Charter before the playoffs.

“We just didn’t have the drive,” McGlothin said. “It was cold, and we looked like we couldn’t move. I think they are all just getting tired.”

They had a chance to rebound from the losses in a game against Rapides Monday night, and the Lady Storm did so winning 3-0. McGlothin was sick and could not attend the game for the first time in a long time, she said.

She watched the game on FaceTime as her team battled on a cold, wet turf field in Tioga. Cailey Geoghagen had two goals and an assist, Graves scored a goal and Chloe Smith had an assist in the game as well. After the game, Smith texted McGlothin to tell her it was weird not having their coach on the sideline.

“I said ‘it was weird not being there.’ These girls are my family. I spend 4 to 5 days a week for five-plus months with them,” McGlothin said. “I couldn’t holler things and tell them what to do while watching from home, but I was more relaxed than I thought. I was able to FaceTime them at halftime as well. They did a great job, especially since one of my wings Sydney Sharp has a knee injury and is unable to play.”

Her son Alden McGlothin is her assistant coach and was in charge of the game. She had full faith in him as a coach. A former Delta Charter player, Alden knows the game very well. Additionally, he had offers to play college soccer. He has been at every practice this season help.

Former Delta Charter player Jacob Hawkins was at the game last night to help. He has come to practice and helps when he doesn’t have work. McGlothin said her son and Hawkins were a big help in her absence.

“I can’t explain what a tremendous help they have been,” McGlothin said. “Alden was my assistant last year. He didn’t think with work and school he would be able to coach this year. Things worked out, and he has been there almost every practice and game. He is great with the players and always has been.”

Delta Charter will not play Grant this Friday. Instead, they will be going to Ouachita Christian School Thursday night.