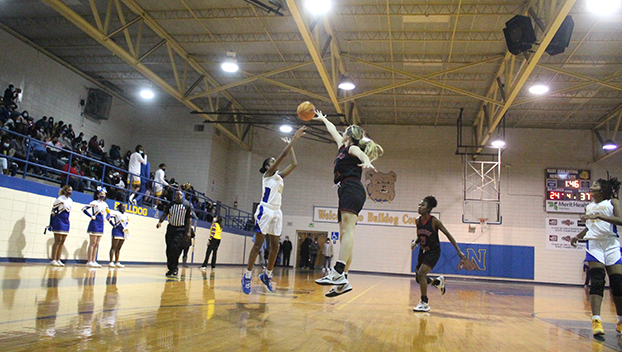 With a minute left in the girls’ game, Natchez was down 10 points to Florence. Head coach Alphaka Moore yelled instructions to her team, but the time melted off the clock. They did not foul when they could have to preserve time.

Natchez struggled offensively in the third quarter scoring just four points. The Bulldogs could not close the gap on the Eagles as they scored 12 points in the fourth quarter matching Florence’s total.

Moore said shots were not falling for the Lady Bulldogs in that quarter. She was proud of her defense’s performance as they created plenty of turnovers and scoring chances.

“I was pleased with the way we played tonight,” Moore said. “This was their one game where everyone played the whole game instead of checking out. One thing about the district tournament is we will play this team again.”

Boys head coach David Haywood said Florence got off to a great start offensively in their game. The Eagles scored 23 points in the second quarter to go up 40-22 at halftime.

“There aren’t any excuses. We didn’t guard well. They got it going early, and when you get it going early, the rim gets bigger,” Haywood said. “We tried a bunch of different defenses. We stayed within striking distance in zone, and at times, our man was good. We just didn’t play solidly enough.”

Friday night, the Bulldogs will play at Brookhaven. The game will not matter in terms of their seeding for the district tournament at Brookhaven on February 8th. It will be a chance for the Bulldogs to improve with game experience.

Haywood said they will use the next two weeks to rest and get their legs back for the district tournament. They will also work on improving their concepts and defense.

“When the district tournament starts it is a new season,” Haywood said. “You just have to win one game to get in the playoffs. We will give it everything we got.”

Natchezian Man, Woman, Businesses of the Year honored during…