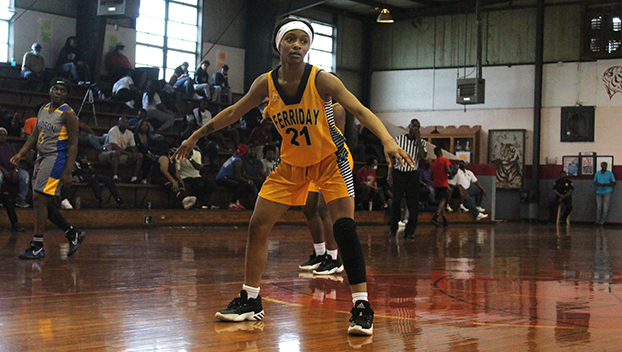 Ferriday’s Shakeria Washington gets set in a high press defense in a game against Madison Parish at the Sicily Island Tournament on Dec. 30, 2021. Ferriday beat Madison 54-34 Tuesday night using a similar strategy. Their defensive pressure has led them to an undefeated start to district play as they host Rayville in a crucial game Friday night. (Hunter Cloud | The Natchez Democrat)

Lady Trojans head coach Lisa Abron said she was impressed by her team’s pressure defense in the last three games. They played well against Madison Parish in the Sicily Island Tournament on December 30, 2021, and knew what to do to beat the Jaguars again.

With four games left, Ferriday has a 3-0 record heading into Friday night as they host Rayville at 6 p.m. It will be a big test for the Lady Trojans as Rayville has been their arch nemesis the past three seasons.

“They are fast and extremely quick,” Abron said. “They play excellent defense and have excellent shooters. We can pull it off, we will be at home. If we can beat them, it will be a great win for us.”

Ferriday’s undefeated start to district play is “pretty cool,” she said but she doesn’t want her team to stop there. They have to continue playing with the same consistency and quality to finish out the season.

Lady Trojan players will have to block out any distractions going into the game Friday night. Abron said the town is talking about the team and fans know they have had trouble with Rayville in the past.

For three seasons, Rayville has had the upper hand in the district game. They are the defending champions and whoever wins the game would be in the driver’s seat for a district title this season.

“We are a senior team and we know what we have to do. If we beat Rayville, we should be district champions,” Abron said. “Struggling against a team, it messes with a player’s mind. I’ve been down playing everything this year. They know what they are up against. It messes with your head a little bit but we will try to not let it bother us this year. We will try to go out and take care of business.”