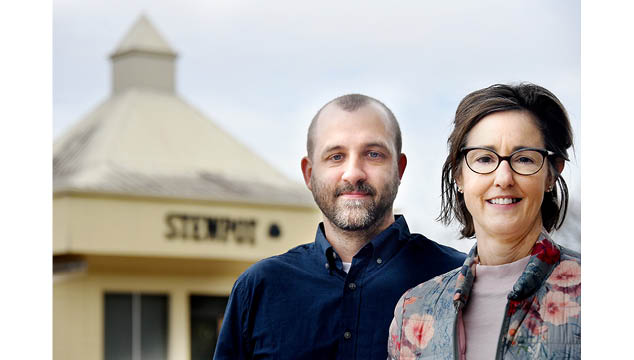 Marcus Archer takes over as director of The Stewpot in March from Amanda Jeansonne, who is moving from Natchez to Florida.

NATCHEZ — Natchez native Amanda Ferguson Jeansonne became director of The Stewpot in Natchez in 2015 when “God opened this door for me and I went through it.”

Now, Jeansonne and her husband, Bennie, who is retiring from Silas Simmons, are moving to the Perdido area of Pensacola, Florida.

“We are going on an adventure,” she said. “My husband likes to salt water fish and we like to go on boat rides, so that’s where we are headed.”

The Stewpot opened on Christmas Day in 1984, when it served 25 meals. Fast forward to 2021, when The Stewpot served about 73,000 meals all on a budget of private donations of about $100,000. Two employees and between 60 and 70 volunteers serve meals to those who need them 365 days a year. Volunteers deliver about 75 percent of those meals.

Jeansonne, who graduated from Trinity Episcopal Day School, moved back to Natchez after she married. She became involved with Connor Burns through Natchez Pottery and the Empty Bowls event he began, which benefits The Stewpot.

She became friends with Louis and Mary Gunning in 2015 when she delivered several checks to Louis Gunning, who served as director of The Stewpot for 26 years.

“As I was bringing the checks, Louis was going through treatments (for cancer),” she said. “We would talk and I would ask questions. ‘How does this work? How do the bills get paid?’”

She said as time went on, it became apparent Gunning did not have much time left.

“I asked myself, who is going to be the next person to do this? It became apparent God was talking to me. He told me, ‘you are the one.’ No one asked me. Louis didn’t even ask me. Louis was a one-man show. I thought to myself, ‘I can do this. This is the door God has opened for me.’ ”

Her first board meeting was June 2015. It’s now time to hand the reins of The Stewpot to a new director. Marcus Archer, who is pastor of Crosspoint Church on Highland Boulevard in Natchez, will become director of the organization on March 1. He will continue as Crosspoint Church pastor. Archer’s church elders agree he has time to do both and his involvement with The Stewpot dovetails with the church’s mission to serve its community.

Archer, too, said his involvement with The Stewpot is the work of God.

Archer, who grew up in Natchez and is also a graduate of Trinity Episcopal Day School, and his wife of six years, Mallory, moved back to Natchez in 2017.

“We are always urging people to go out and do stuff. Put feet to our faith. If what we do in this building doesn’t effector change what we do outside this building, it has no meaning or bearing on life,” Archer said.

One of the members of Archer’s church introduced him to The Stewpot when she was doing some training that involved talking to someone at the organization.

“She started talking to me about The Stewpot and I felt very convicted,” he said. “I have time to give to this and I decided I was going to start volunteering.”

Archer did that in December 2021 and discovered that The Stewpot was “just rolling around in my head. I would come up with these ideas and couldn’t put it out of my mind.”

He had heard Jeansonne was leaving and called her one day while she was driving to Florida and started asking her questions.

“I told her that I had a real crazy idea. Before I even told her what it was, she said, ‘You want to be the director.’ ”

Jeansonne told Archer she was going to set up a meeting with The Stewpot’s board.

Archer met with pastors of Jefferson Street United Methodist Church, St. Mary Basilica and Trinity Episcopal Church, all who serve on the board of The Stewpot.

“With The Stewpot, it’s easy to trust God because he answers any pray. Any need The Stewpot has, it just appears. I told Bennie when we made the decision to move, good things are ahead for The Stewpot, but I never thought that a pastor might be the next director,” Jeansonne said.

“One great thing about The Stewpot is all of the different people and different races and churches who embrace it and everyone gets along. There is no agenda other than feeding people,” she said. “Marcus is walking into an amazing group of people.”

“I am excited about the opportunity,” Archer said. “No matter who you are or where you come from, I don’t care. I want to work with you.”

If you have an interest in working with or volunteering at The Stewpot, please email ntzstewpot@gmail.com.