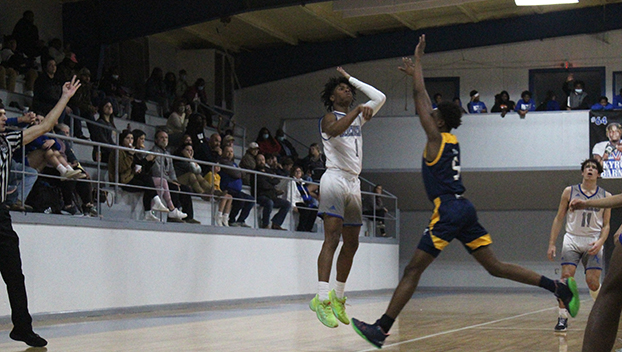 Adams County Christian School senior Tiqi Griffin hit a buzzer beater three to give the Rebels the No. 1 seed in the district tournament. (File Photo | The Natchez Democrat)

MADISON — The Adams County Christian School Rebels lost to the St. Joe Madison Bruins 52-48 last Thursday night in their MAIS District 3-%A and regular-season finale, but Tiqi Griffin made the biggest shot of the season for ACCS.

The Rebels were trailing 52-45 with time winding down before Griffin nailed a 3-pointer at the buzzer to make the Bruins’ winning margin just four points. That gave ACCS the No. 1 seed in next week’s District 3-5A Tournament at Central Hinds Academy because ACCS defeated St. Joe Madison by five points at home earlier this season.

If the Bruins had won by five points, determining the No. 1 seed would have went to defensive points allowed in district games, Rebels head coach Matthew Freeman said. He added that he would not know which team would have ended up with the No. 1 and No. 2 seeds.

As for the game itself, Freeman said, “We missed 21 free throws. Defense played good enough to win. We just couldn’t execute on offense.”

ACCS was held to just eight points in the first quarter and seven points in the second quarter. The Rebels trailed St. Joe Madison 12-8 after one quarter of play and 18-15 at halftime. Freeman said a different type of defense the Bruins used led to his team’s offensive woes.

“They’re the first team we played that played a full-court, man-to-man defense. Everyone else we played used a zone defense,” Freeman said. “It took us a while to figure out what to do offensively.”

The Rebels outscored the Bruins 16-11 in the third quarter for a 31-29 lead. The two teams had several lead changes for part of the fourth quarter before the Bruins turned to another defense that allowed the momentum to go in their favor until Griffin’s huge shot from long distance as time expired.

“They went to their full-court press and we turned the ball over a couple of times, which led to a few easy baskets for them. It was tied up at that time (45-45),” Freeman said. “Thankfully we hit the 3 at the buzzer.”

The Rebels finished the regular season at 21-5 overall and 9-1 in district play. What is known about the boys’ bracket for the District 3-5A Tournament is that ACCS is the No. 1 seed, St. Joe Madison is the No. 2 seed, and Copiah Academy is the No. 3 seed. Freeman added that there is a tie for between Cathedral High School, St. Aloysius High School, and Central Hinds Academy to determine the No. 4, 5 and 6 seeds.

The Lady Rebels fell to 5-17 overall and 2-8 in district play. They will be the No. 5 seed in the girls’ bracket of next week’s District 3-5A Tournament at Central Hinds Academy.