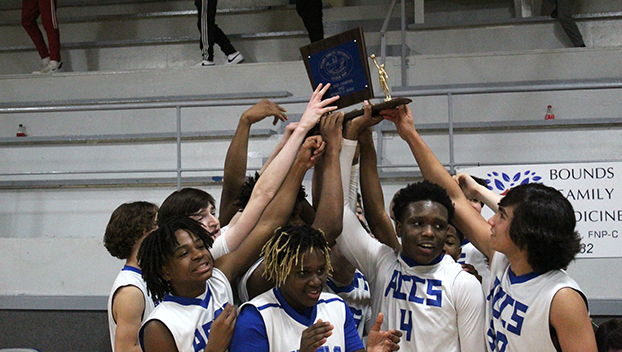 NATCHEZ — Saturday’s MAIS 5A District 3 tournament took three overtimes to determine the boy’s champion. Adams County Christian School rallied from a 13 point deficit in the first half to win the game 46-42 over Madison St. Joe in the third and final overtime.

“I’m soaked and cold. It’s freezing outside, but whatever makes these kids happy, I’m fine with it,” Freeman said. “The kids were excited to keep the tradition going. They came in knowing this was it for the season. They laid it all out on the line.”

Madison St. Joe came right out of the gate and landed three solid punches to go up 7-0 in 40 seconds. They had set into a press defense and forced him to call a timeout.

He said the team had to “quit being scared,” and “play the game you know how to play.” They responded well, although it took them a while to claw back.

AC had to play physically, and the referees let both teams do so. It was a rematch for the teams as they had played Thursday night. St. Joesph won one game in the series this season, and AC won the other one coming into the game.

Landon McGuire, a transfer from Vidalia Junior High, stepped up to the plate in the game scoring 14 points. He said the Bruins just came out faster.

“We told each other don’t be frustrated,” McGuire said. “Last game, we got frustrated with each other and lost. We were ready and prepared for what they had.”

Madison St. Joe had a lot of height to their advantage. It showed inside the paint. AC tried plenty of times to drive the lane, but the Bruins stonewalled them at the basket.

The Rebels had to box out more. He said they still found it challenging to rebound. It was also hard to play in the post, but they learned to play with a different style.

AC’s offense changed from a drive for layups to a pull-up jumper game which helped create space to beat contested shots.

Adrian Walker was in foul trouble with four fouls in the third quarter. Freeman pulled him out of the game until the fourth quarter. Walker managed to play an entire quarter and three overtime periods without fouling out of the game. He finished the game with eight points.

“He stepped up and had some big steals under the goal that changed the game,” Freeman said. “It was exciting but stressful. They wanted the game so bad. Landon had an ankle injury and went to Mr. Fred and had him tape it up so he could get back in. Adrian had a cramp. He walked it off, drank some water and came back in. They played their hearts out. I couldn’t ask for more.”