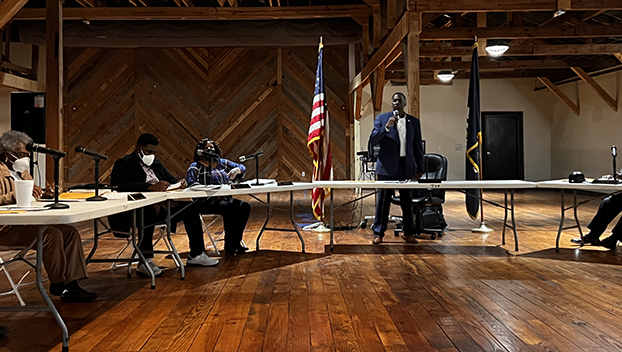 Ferriday aldermen passed an operating budget that is more than seven months overdue during a Monday meeting. (Sabrina Robertson | The Natchez Democrat)

FERRIDAY, La. — The Town of Ferriday has passed an operating budget so that town functions can resume as normal for the first time since Wednesday.

The five-member Board of Alderman voted unanimously to pass the budget, some of them reluctantly, so that the town employees could once again get paid for providing police protection, fire protection as well water, sewer and government services.

These services ceased on Thursday because the town has repeatedly failed to adopt a budget since a June 15 deadline, Louisiana State Legislative Auditor Michael J. Waguespack said during a special called meeting of the board on Monday evening.

Once the new fiscal period started without a budget in place, Waguespack said the town officials were informed by the state auditor’s office that they could not spend more than 50% of the prior year’s operating budget until a new one is approved.

After seven months without a budget, the town was out of compliance and was forced to stop spending money, he said. That meant that all town employees, including first responders, could not get paychecks. Those who did continue working did so as volunteers, Ferriday Mayor Rydell Turner said.

The Concordia Parish Sheriff’s Office offered to send some of their resources to Ferriday to ensure that the law continued to be enforced and that citizens would not be without protection, he said.

The budget failed to pass multiple times because some aldermen had disagreements with the way operating money was budgeted. Turner said some aldermen disagreed with budgeting raises for police officers and using federal COVID-19 relief funds to pay town employees a one-time bonus for hazard pay, stating if one employee receives the bonus, all of them should.

“We may have had differences in the past, but that is to be expected as politicians,” he said.

Assistant Legislative Auditor Roger Harris and District Attorney Brad Burget said the laws on the subject are clear, leaving the aldermen without a choice—adopt a budget or face criminal charges.

“The law says the Town of Ferriday shall adopt a budget—they shall,” Harris said. “Seven and a half months, you didn’t adopt a budget. Somewhere along the line, someone failed to do what they were supposed to do. One-half of the last year’s budget has been spent, so now you have to stop spending. Please take care of business and do what the law says what you’re supposed to do.”

Harris said once the initial operating budget has passed, the aldermen have it within their power to change what is in it with a majority vote. He also said the aldermen can require transparency with the town’s finances by passing an ordinance.

Elijah “Stepper” Banks and Gail Pryor voted in favor of passing the budget.

Lloyd said she continued to vote no because the mayor, Turner, lacked transparency and respect for the aldermen.

“It is not fair to us as a board that we don’t get what we ask for,” she said.

Lloyd said she has waited since September to receive a financial report detailing what money was being spent and where and still has not received one.

“I’m drawing any conclusions about whether a law has been violated,” Harris said. “I do not know enough of the facts, but what I do know is that you all have not passed the budget and you need to pass the budget. If you are not getting financial information, there is a way to fix that as well. You can draw up an ordinance, you can vote on the ordinance and you can pass the ordinance to allow you to get financial information on a regular basis.”

Turner said in his defense he was not unwilling to work with the Board of Aldermen. He added allegations that he threatened to have the aldermen arrested were untrue.

“Mayor, you made the statement that ‘our three asses’ were going to go to jail,” Lloyd said. “You know you said that.”

After the budget was voted down, Burget said again that the operating budget had to be passed regardless of the aldermen’s reservations and could still be changed afterward, prompting the three who voted no to rescind their previous vote.

“It can be a malfeasance in office if the budget is not passed,” Burget said. “I don’t want anyone not to vote their conscience, but I think you are doing the town a disservice by not voting for this budget.”

“I’m reluctantly voting yes for the lack of transparency on the issues which leave me in a state of uncertainty,” Bacon said. “But I will vote yes just to get it passed.”

In agreement, Keys said, “Every time I go to the Town Hall as a town council member the police get called on me for asking for different documents. They are writing checks and doing what they want to do and I don’t think it is right.”

Lloyd said she too voted yes reluctantly. She added town employees who have bashed town officials publicly on social media should be fired.

Alderman speaks out about charges: ‘I thought there was…