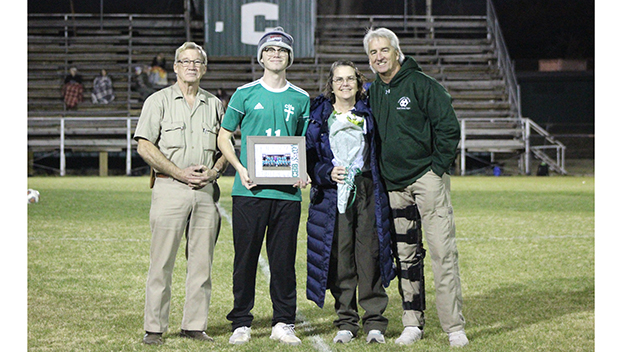 Joseph Garrity celebrates senior night with his dad Byron, left, his mom Dorothy, right, and Head Coach Dennis Hogue. The senior's final home game will be against ACCS and will be the end of 19 consecutive years of family legacy. (Hunter Cloud The Natchez Democrat)

NATCHEZ — Cathedral fell 8-0 to Copiah Academy Monday night with four starters out, two of them in COVID quarantine, one at a funeral and another on the sidelines. Head Coach Dennis Hogue said the opposing coach was kind enough to call off the dogs once the match got out of hand on senior night.

His only senior, Joseph Garrity, was recognized for senior night at halftime with his dad Byron Garrity and his mom Dorothy Garrity. Senior night would have been on the night of the ACCS game next Tuesday, but she has to go to chemotherapy in Houston, Garrity said.

The conclusion of this soccer season will wrap up 19 consecutive years of Garritys wearing a Cathedral jersey on the soccer field. Hogue coached Joseph’s siblings Daniel, Sarah, and Thomas Garrity. Joseph’s final home game will be against ACCS next Tuesday. His coach has not given much thought to the end of an era.

“It hasn’t sunk in yet. There has always been a Garrity on the field,” Hogue said. “Dorothy has been amazing and super helpful. We could count on them to do everything. For a while, they would host dinners, especially during the girl’s season. Usually, you can hear Byron in the stands. It will be weird. After he is gone, another group of parents will step up.”

Joseph has been a student at Cathedral since Pre-Kindergarten when he was three. He is an Eagle Scout and earned his badge by refurbishing bleachers at Carroll Jones and Ballew-Bowlin baseball fields at Duncan Park in Natchez.

He plays tennis in the off-season for Cathedral. His teammate and doubles partner Grayson Guedon made it to the MAIS state championships last season. Joseph has played soccer at Cathedral since 7th grade and is a standout goalie.

When he is not in goal, he takes up a midfielder’s position and can be a very aggressive and physical player. Hogue said he is a student of the game as well.

Sometimes, Cathedral will be struggling against an opponent, and Joseph will suggest a tactical change to Hogue.

Academically, he plans to attend the University of Mississippi for pre-law and accounting. His mind is constantly analyzing the opponent in games.

“I’m thankful for him. He has been nothing but positive for us,” Hogue said. “He builds us up. Good or bad, he always has something to say. He is the first guy to support you. He is a great athlete and teammate.”

During soccer games, you can usually hear Byron yelling something to the referees to argue against a call or point out something they missed. Joseph is vocal in the student section at basketball, football or baseball games.

He plays with a lot of emotion on the tennis court as he does on the soccer pitch. As a family, they leave behind a legacy of spirited competitors.

“The whole family is athletic. They do everything,” Hogue said. “They are big in the community. They are all so competitive. Daniel and Thomas were vocal too. They get it honestly. They are not ones to hold their tongues. They call it as they see it.”