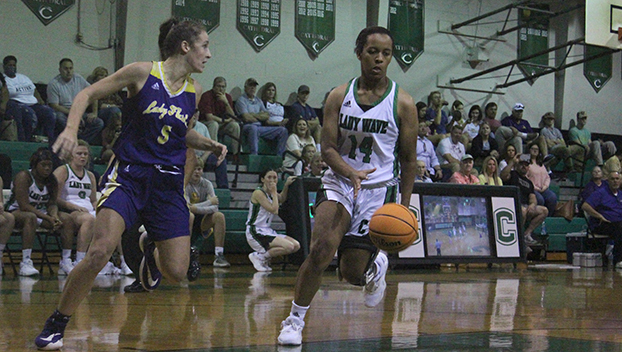 RAYMOND — The No. 5 seed Adams County Christian School Lady Rebels rallied to force overtime against cross-town rival and No. 4 seed Cathedral High School, only to lose to the Lady Green Wave 35-32 in the first round of the 2022 MAIS District 3-5A Tournament at Central Hinds Academy.

The game was tied at 6-6 at the end of the first quarter. Both teams struggled offensively in the second quarter as Cathedral narrowly outscored ACCS 5-3 for an 11-9 halftime lead. Then it looked like the Lady Green Wave was going to pull away after taking such a big lead, but they only managed to outscore the Lady Rebels 11-8 in the third quarter for a 22-17 lead.

“We just didn’t play as well as we should have,” Lady Green Wave head coach Bernita Dunbar said. “Our defense was a little lacking compared to what I’m used to seeing. We were out of position. But I’ll take the win.

Even down as many points as it was, ACCS would mount one last comeback in the fourth quarter. The Lady Rebels would force the game to go into overtime after putting 15 points in the fourth quarter while holding the Lady Green Wave to just 10 points to make it a 32-32 game.

Unfortunately for the Lady Rebels, they could not keep the momentum going as they were shut out in the overtime period 3-0 and their season was over.

“The girls were able to hang on for the win,” Dunbar said. “Neither team shot the ball well. We didn’t shoot the ball like I hope we would have.”

“The effort, I can’t complain about that. They played hard all season. Just wish we had better results,” Spears said. “I hate it for them. I hate it for the seniors. The never quit. That’s all I can ask for.”

“This was one of my funnest years of coaching. I don’t know why. I just enjoyed it,” Spears said.

Cathedral (9-15) will take on No. 1 seed Copiah Academy Friday at 4 p.m. in a girls’ semifinal-round game. With the win over ACCS, the Lady Green Wave also clinched a berth in next week’s Class 5A South State Tournament at Copiah Academy in Gallman.

RAYMOND — in the nightcap of the first round of the 2022 MAIS District 3-5A Tournament last Tuesday night, the No. 5 seed Cathedral High School Green Wave stunned No. 4 seed and tournament host Central Hinds Academy 54-52 to end the Cougars’ season. No other information on the game was available.

With the win, Cathedral (no record available) will take on No. 1 seed and cross-town rival Adams County Christian School in the boys’ semifinals Friday at 5:30 p.m. Both teams have also clinched spots in the Class 5A South State Tournament, which takes place next week at Copiah Academy.

Psychological thriller to begin filming in Natchez later this…