City gets $500,000 TAP grant for sidewalk, lighting improvements for 100 block of North Commerce 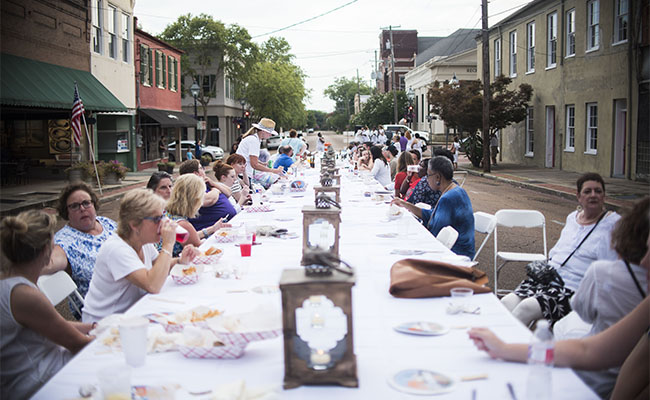 The 100 block of North Commerce is at the city's center and has been the site of a number of community gatherings, including this Soul Food Fusion dinner, part of 2019's Juneteenth celebration in Natchez (Democrat file photo)

NATCHEZ — The City of Natchez is the recipient of a $469,100 grant for improvements at the city’s center, the 100 block of North Commerce Street.

Those funds, which will come from the federal Transportation Alternative Program known at TAP grants, coupled with a 20 percent match from the city, will allow for aesthetic improvements on that block.

Improvements will include upgrading sidewalks to current Americans with Disabilities Act standards, new lighting and lighting poles, which will provide safety for both pedestrian and vehicular traffic and improve handicapped access at the intersections of Main and Franklin streets.

“We are very pleased to announce the approval of these federal dollars for the City of Natchez. While our goal at MDOT is to increase the safety of the traveling public, it doesn’t stop there; these funds help ensure we are improving the quality of life for residents as well, said Commissioner Tom King of the Southern Transportation District.

Natchez Mayor Dan Gibson said the improvements would also include burying some utilities in the block while the sidewalk improvements are taking place.

“On behalf of the City of Natchez, our Board of Aldermen and the citizens, I would like to thank Southern Transportation Commissioner Tom King for providing $469,100 in federal Transportation Alternative Program funds for the purpose of improvements to the Downtown Entertainment District along the 100 block of North Commerce Street,” said Natchez Mayor Dan Gibson.

Plans also call for over-the-street café-like lighting, which will add pleasing aesthetics to the area when events are held there.

“I am grateful to Commissioner Tom King and MDOT for accepting our request to fund the restoration of sidewalks on Commerce Street. We have been in communication with Commissioner King and his office for more than a year to assist us in bringing our city into compliance with the Americans with Disabilities Act and the Rehabilitation Act. This area of downtown was initially discussed.”

Alderwoman Valencia Hall, whose district includes the 100 block of North Commerce, said, “There have been delays, but this request is now being fully funded. Thank you Commissioner King and Mississippi Department of Transportation for recognizing that all means of transportation are crucial, particularly for individuals with disabilities.”

“We also want to thank Commissioner King for the recent cleaning by the Mississippi Department of Transportation of the Natchez Parkway Bridge terminus on Liberty Road and the safety improvements made on Morgantown Road. These contributions greatly enhance the safety, beauty and attractiveness of our historic city and we are grateful to Commissioner King and MDOT for their part in the Natchez Renewal,” Gibson said.

He said the city will provide additional information regarding timelines and impacts to traffic prior to the start of construction.

The city’s last TAP grant was in 2013 and involved improvements at The Depot on the bluff.