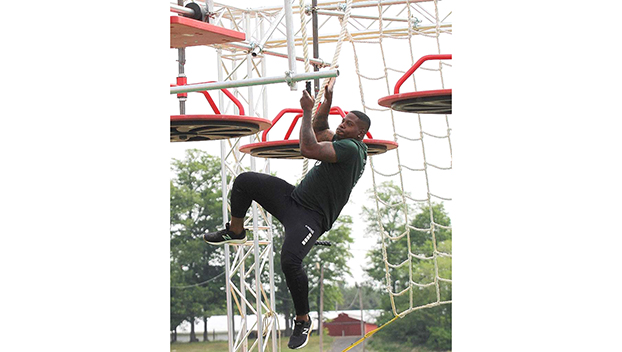 NATCHEZ — Herbert Steadman is a Natchez High alumnus, a former soccer player, a barber and an active Third Class Petty Officer in the Navy. On Tuesday, he added one more designation to his resume.

He is now an American Ninja Warrior contestant and will compete in the regional competition held in San Antonio, Texas, at the Alamodome from March 20 to March 24.

Back in November, he submitted his audition video and received a call Tuesday telling him he made it.

“It is unreal. I didn’t expect them to get back to me,” Steadman said. “They were so late. They finally got back to me. They asked me for some more footage last week so I sent it in and they said they had what they needed. I thought it was over with.”

A former soccer player at Mississippi Gulf Coast Community College, he started training for ninja warrior competitions in September of 2020. The first time he ever ran a ninja warrior course he did so terribly, he said.

Over time, he started competing at local gyms in the Virginia Beach area where he is stationed and picked up his skill a little bit. A rookie on the American Ninja Warrior show, he is a little nervous ahead of the competition.

“I’m excited but also nervous,” Steadman said. “I have seen people fall on the first obstacle because of nerves. I’m nervous as a rookie on the show.”

Looking for a challenge

In his audition tape, Steadman submitted an HD video of him going through training at a ninja warrior gym and told his life story. Originally from Shreveport, Louisiana, he moved to Natchez with his mom and played soccer at Natchez High School.

After playing college soccer at Mississippi Gulf Coast Community College, he continued his education at the University of Central Arkansas where he got his barbers license in 2016. He then left UCA and enlisted in the US Navy in 2019 and graduated from basic training in 2020.