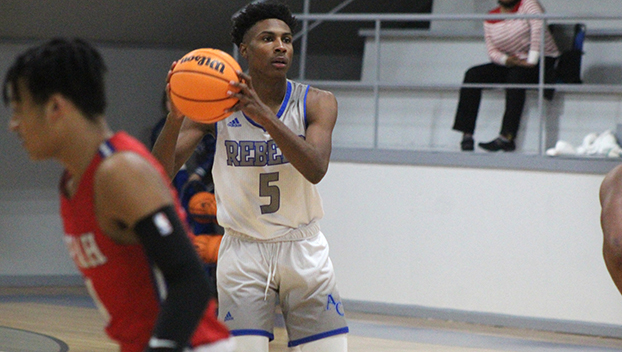 RAYMOND — It was tough sledding for Adams County Christian School’s varsity boys’ basketball team last Saturday night as the No. 1 seed Rebels lost to the No. 2 seed St. Joe Madison Bruins 48-32 in the boys’ championship game of the 2022 MAIS District 3-5A Tournament at Central Hinds Academy.

St. Joe Madison made it tough in more ways than one for ACCS to have any kind of offensive rhythm throughout the title game. They held Tiqi Griffin, the Rebels’ leading scorer this season, to just nine points.

“They packed the lane on us and defended us very well,” Rebels head coach Matthew Freeman said. “We missed some easy lay-ups. Once we got down, we weren’t able to recover.”

Freeman said that the Bruins ran a zone defense and put everyone in the lane, making it “very difficult” for Griffin and others to score.

“We needed other guys to step up. We just weren’t able to get it done,” Freeman said.

With the loss, the Rebels will be the district’s No. 2 seed in the boys’ bracket at the MAIS Class 5A South State Tournament at Copiah Academy in Gallman. First-round games were slated for Tuesday and Wednesday. ACCS took on District 4-5A No. 3 seed Columbia Academy at 7:45 p.m. Tuesday.

RAYMOND — In latest chapter of the cross-town rivalry between Adams County Christian School and Cathedral High School, the No. 1 seed Rebels defeated the No. 5 seed Green Wave 66-51 in the boys’ semifinals last Friday night at the MAIS District 3-5A Tournament.

Cathedral had no answer for ACCS’s TIqi Griffin, who led all scorers with 31 points. Jamar Kaho Jr. and DK McGruder also scored in double figures with 14 points apiece.

While Rebels head coach Matthew Freeman was pleased with how his team played on one end of the court, he wasn’t as thrilled with the effort on the other end.

“We had a good offensive showing. We didn’t play good on defense,” Freeman said. “But we had three players who played good on offense, especially Tiqi. He was able to put a lot of pressure on Cathedral. He was fouled a lot. He made 12 of 16 free throws.”