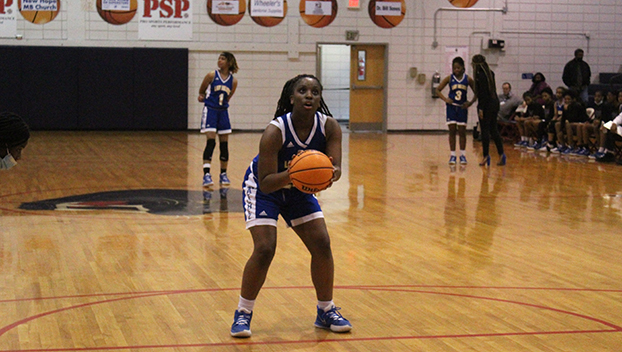 BROOKHAVEN — Natchez High School scored two points in the second quarter against West Jones Tuesday afternoon. It was too much of a hole for the Lady Bulldogs to overcome as they fell 50-34 in their 5A region 5 district tournament opener.

Head coach Alphaka Moore’s team has consistently struggled to play all four quarters this season. As a young team, the Lady Bulldogs are trying to find themselves and their role, she said.

“We just struggled scoring. It’s like a mental shutdown,” Moore said. “We never know which quarter it will be. It’s like everyone shuts down. You have to have someone push through and with our young team we haven’t found that person yet.”

Natchez was led in scoring by Zamonie Wilson who had 12 points and Jaliyah Wright who had 8 points in the loss. Natchez missed 9 out of 17 free throws in the contest but it was an improvement from previous games, she said.

They will play the loser of Florence vs Brookhaven Friday. It will be an elimination game and one they must win.

“We just have to find a way to get it done,” Moore said. “When we aren’t scoring the energy has to come from the bench. At this point in the season it is all about mental toughness.”