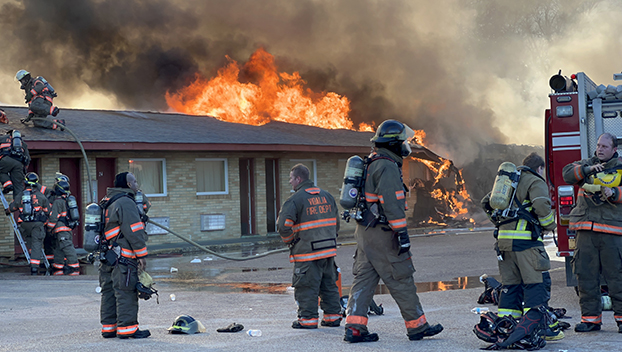 VIDALIA, La. — The Vidalia Police Department has arrested Edward Meister Jr., 51, from Ferriday, on the charge of aggravated arson in connection with a Monday afternoon fire that destroyed more than half of the Budget Inn hotel in Vidalia, Louisiana.

Vidalia Police Chief Joey Merrill said while the Louisiana Fire Marshall is still investigating the fire. However, Merrill said they have reason to believe that Meister started a small fire in his hotel room that got out of his control. Additional charges could be forthcoming after further investigation, Merrill said.

If Meister is convicted, the charge of aggravated arson carries a minimum prison sentence of six years and as many as 20 years, Merrill said.

No one was injured in the fire, Merrill said. However, Budget Inn owner Jay Bhakta said the occupants of approximately 20 rooms were displaced as the hotel was engulfed in flames.

First responders were dispatched to the fire at approximately 3 p.m. and were still fighting back the flames hours later.

Merrill thanked the collaborative efforts of the Vidalia police and fire departments, the Concordia Parish Sheriff’s Office, Concordia Fire District 2, Natchez Fire Department AMR ambulance service and Louisiana Fire Marshal for containing it to one building as the wind helped the fire spread.

“I’m glad all the agencies stood together and we got the fire put out with no injures,” he said. He added The Café located only a few feet from where the hotel was blazing sustained only minor damage if any and is still open for business.

“All the businesses and houses around the hotel are fine,” he said. “I want to thank the fire departments for doing an outstanding job.”

The Cafe’s building closest to the hotel is a warehouse full of storage items protected by a wall of brick and a metal roof.

“We have an amazing group out here keeping things under control,” said Vidalia Mayor Buz Craft as he watched at the scene of the fire. “We’ve got our gas and utility company’s here to make sure that everything is cut off and our water company here to make sure the town doesn’t lose water pressure.”

As he spoke, gallons of water by the hundreds of thousands were being dumped onto the hotel building to keep the flames at bay.