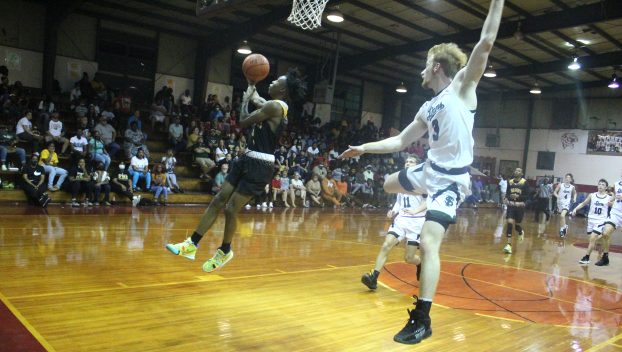 BASTROP, La. — Derrick Carson led Ferriday High School with 14 points and Keynan Milligan had 12 points as the Trojans pulled away for a 57-45 win over the Beekman Charter School Tigers Tuesday night in an LHSAA District 2-2A game.

Even though Beekman Charter entered the game winless after 20 games, Trojans head coach Shawn Davis said the Tigers proved to be a much difficult opponent than expected. The Tigers also used kind of defense that Ferriday had not seen at all this season.

“It was a difficult opponent. Some teams just match up with you. They matched up pretty good with us,” Davis said. “They played a defense that we haven’t seen all year. It was an odd 1-3-1 match-up zone. Their guards were bigger than our guards. That made it difficult to pass over them. That created some turnovers. It made it difficult to shoot over them and drive to the basket.”

The combination of that 1-3-1 match-up zone and their size at both the point guard and shooting guard positions allowed Beekman Charter to stay in the game with Ferriday for much of the first half.

The first quarter ended with the game tied at 11-11. Ferriday was able to outscore Beekman Charter 15-11 in the second quarter for a 26-22 halftime lead. The third quarter proved to be pivotal for the Trojans as they put up 16 points while holding the Tigers to just 10 points for a 42-32 advantage.

“It was a good, solid road victory,” Davis said. “It was a two-and-a-half-hour drive up there. I didn’t know it was that long.”

Davis said that Carson and Milligan stepped up for the Trojans, as did freshman Trey Jackson. Trey Jackson, along with his brother Mark Jackson, are the two players who Davis said transferred from Tioga High School.

“Trey Jackson only scored eight points, but he also had 13 rebounds and five blocks. He’s a freshman,” Davis said.

K.J. King also stepped up for Ferriday as he scored nine points and Chavo Thomas added seven points. McIntyre (no first name given) led Beekman Charter with a game-high 17 points.

As for what’s next for the Trojans (10-11, 4-3), Davis said, “We’ll have to get some practice in. The brackets don’t come out until Feb. 19. Hopefully, we can pick up Tensas (High School) and someone else for a scrimmage game. I’m looking forward to it (playoffs). I think we have a chance.

Davis noted that as of the latest LHSAA Class 2A power ratings that came out earlier this week, the Trojans are No. 28. He added, “Hopefully we can stay in the top 32.” The top 32 teams earn a berth in the Class 2A Playoffs.

BASTROP, La. — Aaliyah Gray led the Ferriday High School Lady Trojans with a game-high 23 points and Shekayla Miller added 15 points as they needed a big second half to pull away for a 42-31 win over the Beekman Charter School Lady Tigers Tuesday night in LHSAA District 2-2A action.

Lady Trojans head coach Lisa Abron said the long drive from Ferriday to Bastrop took its toll on her team in the first half, and it showed. Beekman Charter took an 11-9 lead over Ferriday after one quarter of play and it looked like an upset could have been brewing.

The Lady Trojans were able to outscore the Lady Tigers 11-9 in the second quarter to make it a 20-20 game at halftime. Abron said the play of Gray was crucial to the Lady Trojans staying in the game in the first half.

“She basically kept us in the game. She made a lot of shots for us,” Abron said. “She kept us in it. It was a long ride. We got there a tad bit late. We weren’t able to stretch out properly, so maybe that led to our slow start. They didn’t come out strong in the beginning because of the long drive.”

Ferriday changed its defense in the second half to a man-to-man defense, which forced a lot of turnovers that led to a lot of fast-break opportunities for the Lady Trojans. They outscored the Lady Tigers 12-7 in the third quarter and 10-4 in the fourth quarter.

“At halftime, we adjusted our defense. We got a lot of turnovers from them, which led to a lot of easy baskets. We also got our legs back in the second half.”

The Lady Trojans ended their regular season with a 15-5 overall record and a 6-1 record in District 2-2A. Next up for them is the LHSAA Class 2A Playoffs. Abron said the brackets will come out next week.

“We’re going to be practicing for the playoffs. We’ll be working on our craft. It looks like we’ll finish second in district (behind Rayville High School). We’re ranked No. 15 in (Class) 2A. If we stay there, we’ll be hosting a playoff game. All we can do is wait at this point.”