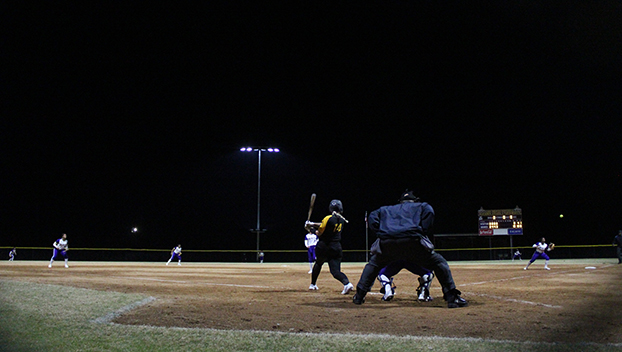 Alcorn State celebrated a milestone in its softball team's history. For the first time in school history, the Lady Braves played a night game on campus. They scored 13 runs on 13 hits as they blanked Kentucky State University 13-0 Thursday night. (Hunter Cloud | The Natchez Democrat)

LORMAN — Alcorn State University lit up its softball field for its first night game played on campus in school history. Additionally, the Braves lit up the scoreboard with 13 runs on 13 hits to beat Kentucky State 13-0 Thursday night.

Alcorn State president Felecia M. Nave, a Prentis Native, threw out the first pitch. She said she had not touched a ball in about 30 years and got in some practice before the game. Nave graduated from Alcorn State in 1996 with a chemistry degree.

“I was nervous. The young ladies were gracious to not laugh at me and helped me get ready for the first pitch,” Nave said. “We were able to make this happen for the ladies. They won’t have to come to play day games. We can host night games now. We want to do everything we can to support their athletic careers.”

The lights were installed by Musco about a month ago and cost $300,000. COVID delayed work on the project, which began in the spring of 2020, she said.

Head coach Josef Rankin said getting lights for the softball field was one of the first things he asked for when he came to the school. His tenure with the Lady Braves began in 2014.

Having lights allows the Braves to have more fans in attendance, and the opening night crowd was about the size of a crowd for a mid-season game, Interim Athletic Director Cyrus Russ said. As the season warms up, he expects even more fans to be present.

Lighting up the score

Alcorn State fans were in for an offensive treat as the Lady Braves scored 13 runs on 13 hits. They opened the game with a two-run inning. The Braves sprung the game wide open with a four-run frame in the bottom of the second.

Redshirt sophomore Tyesha Tcake Cole, a transfer from Jones College and native of Philadelphia, had two hits and a walk-in her first game as a Brave. Her first at-bat ended with a triple which swung the momentum in Alcorn State’s favor.

“I just remember throwing my hands at the pitch. I was already in front because it was an off-speed pitch, and I had two strikes,” Cole said. “I knew it was a triple when I saw it went over the fielder’s head. It was exciting to get the girls going.”

She said she felt confident at the plate. In practice, most of her swings resulted in base hits, so she knew it would carry over to the game.

Rankin was pleased with his team’s performance to open up the season. They made zero errors on defense, and graduate student Brenn Ursin pitched a five-inning shutout. Offensively, they got runners on base and pushed them across the plate.

“We look forward to this year. We have some ladies who can swing the bat well,” Rankin said. “We have some depth too. It is always good when you put up 13 runs. Usually, things work out for you.”

Starting the season off with a bang

Cole, who played at Jones College last season, ended her freshman year with a bang as the Bobcats finished second in the junior college national championships last season. Her career at Alcorn opened with a great performance.

She said she had no idea they had not had lights before she came to Alcorn State. She learned of the milestone in the pregame ceremony and thought it was cool to be a part of history.

“It is amazing,” Cole said. “We got to make history, and we had a shutout.”