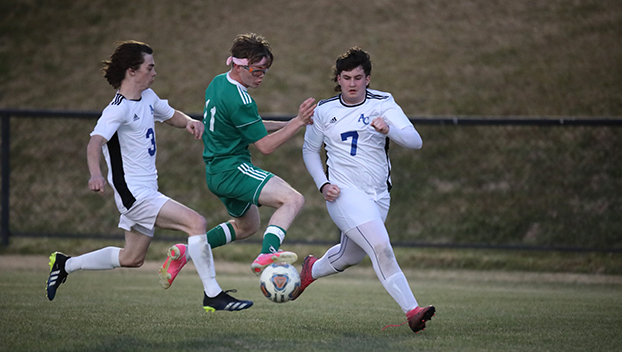 Cathedral's only senior Joseph Garrity worked hard to score a goal in his final game as a Green Wave. He was kept out of the goal by strong defensive play but netted four assists in Cathedral's 7-0 win over ACCS. From left, Tommy Van Winkle, Garrity and Nick Beach battle for a ball Thursday evening. (Jody Upton | Green Wave Athletics)

Instead, he finished the night with four assists. Jacob Moore and Grayson Guedon scored a hattrick, and John Carter Austin topped it off with one goal.
Cathedral Head Coach Dennis Hogue was thrilled with his team’s performance. Garrity played a great game to end his career as a Green Wave.

Cathedral scored three goals in the first half and four goals in the second half. They played one of their best games to beat Adams County Christian School.

Alcorn State lights up softball field, scoreboard for its…