Cathedral dominates cross-town rival, AC seniors give all to end season of rebuilding 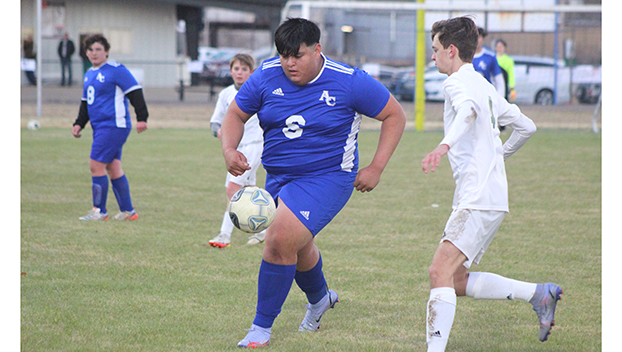 ACCS senior Louis Loy finished his final season with 10 assists and three goals. Head Coach Christian Hughes said he has known Loy since he was 10 or 11 and it was hard watching him play his final game. (Hunter Cloud | The Natchez Democrat)

Instead, he finished the night with four assists. Jacob Moore and Grayson Guedon scored a hattrick, and John Carter Austin topped it off with one goal.

Cathedral Head Coach Dennis Hogue was thrilled with his team’s performance. Garrity played a great game to end his career as a Green Wave.

AC head coach Chris Hughes said he had a player or two man mark Joseph but eliminating one threat left open threats in Moore and Guedon. The Rebels played hard but they made too many mistakes on defense.

At the final whistle, tears started falling down Garrity’s face. Hogue, said he plays with a lot of emotion but the tears were a surprise. It had hit him, he played his last game as a Green Wave and ended 19 years of family legacy.

Since he was three, Garrity has played soccer in league teams, travel and with Cathedral. He doesn’t know what he will do moving forward, but he did take time to reflect on his career.

“It wasn’t all sad. I got to say my goodbyes and we laughed about how quiet it will be next year,” Garrity said. “The past week, I had been going through some of my film over the years reminiscing. I wish we could have practice today, tomorrow and the next day but it has come time for me to hang up the cleats matter how hard it is. It is very bittersweet. I’m going to miss my teammates, Coach Rick and Dennis. Now it is time to move on to big and better things.”

Cathedral scored three goals in the first half and four goals in the second half. They played one of their best games to beat Adams County Christian School. Garrity said he would take a dominant win and four assists over scoring a goal any day.

A time of rebuilding

Cathedral and Adams County Christian School went through a rebuilding year as both squads were fairly young. ACCS lost 12 seniors, eight or nine of those were starters, Hughes said. He couldn’t be upset about the season or their final game because his players played hard.

AC is looking ahead to a future where Samuel Merriett and Brody Watts will be the senior leaders of the Rebels next season. They have several eighth and ninth graders who will get better for the next season.

It was a hard way to send out seniors Louis Loy, Tommy Van Winkle and Alex Patterson. Hughes said he had known Loy since he was about 10 or 11. It was difficult to see him play his final soccer game in an AC jersey, Hughes said.