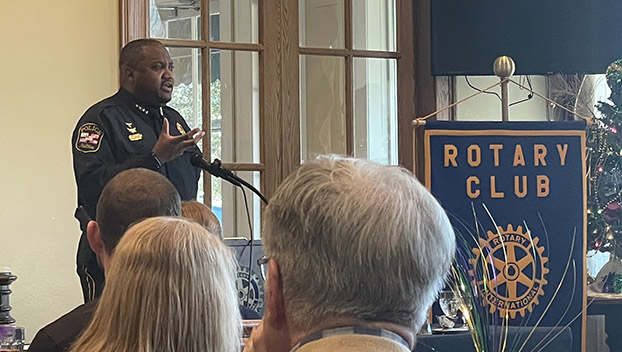 NATCHEZ — Natchez Police Chief Joseph Daughtry informed and entertained members of the Rotary Club of Natchez Wednesday, using stories from his 25 years of policing to talk about changes in the Natchez Police Department aimed at keeping citizens safe.

Daughtry also asked for citizens’ help in being proactive in order to give criminals fewer opportunities to commit crimes.

Daughtry, a native of New Orleans, has been Natchez’s chief of police since December 2020. Since that time, he has commenced a revamping of the police department, hiring new officers and replacing tired, worn-out equipment.

“Ladies and gentlemen, I’m not going to tell you Natchez is Mayberry, because it’s not. But we are far from big-city crime,” he said.

Daughtry said the Natchez Police Department is becoming proactive in its approach to policing.

“The days of sitting down waiting for you can call and we come and respond are over. I tell my guys when they go 10-8, which means they are in service, you’ve got to get it. You have a job to do. Citizens are paying you to do your job. Citizens deserve to be safe,” he said.

The number of officers at work in Natchez is greater than in a number of years.

“We have more manpower now than we did before. We did have three to four people per shift and that included the supervisor. Now we are averaging five to six per shift. One shift the other night, we had seven, but that was including two who are in training. Once they get cut loose, they will add even more manpower,” Daughtry said.

Police need residents’ help in reducing the number of opportunities for criminals he said.

“We had two auto thefts today. One woman went to the gas station, went into the store for about 20 minutes and when she came out, her car was gone. The officer asked her where her keys were. She told him they were in the car. She left it running. She told the officer she never thought someone would steal her car,” he said.

The other auto theft was a boyfriend and girlfriend who were breaking up and the boyfriend “tried to repo” the vehicle.

”At the end of the day, when it comes across the radio and people in the community hear it, they think we are having this problem. But a lot of this is people need to be proactive. We need you to be proactive,” he said.

Daughtry discussed working a rash of auto burglaries once in which 28 cars were broken into in a three-week period.

“I was furious. I was up at night. I was riding at night. I made my command staff get out. They were parking in neighborhoods and getting out walking,” he said.  “But I started reading the reports, and out of 28 cars, do you know how many were locked? Zero. They would leave guns on the seat. I had one lady who had a bank bag she left on the seat. Now, if I go by a car and you are looking at a bag and you see a UMB or a Delta Bank bag and you pull on the door handle and it’s unlocked … What I tell people is a true definition of crime is opportunity. We have to reduce the opportunity for crime.

Daughtry discussed the department’s new SWAT and VIPER squads and other changes. He said other police chiefs have asked him how he gets the city’s Mayor and Board of Aldermen to support the department.

“Just be honest with them. We had officers that had one pair of pants. We have officers that had coats that are 15, 16 years old. Some only had two shirts and none of them had long sleeve shirts,” Daughtry said. “When I went to them, they had no idea. No one brought this to their attention. They didn’t know this stuff. So when I told them what we needed, they immediately brought it before the board and approved for us to get new uniforms.

“And I’m glad to say every officer in the Natchez Police Department has a full set of uniforms. They have four pairs of pants, three short sleeve shirts and two long sleeve shirts and everybody has a new winter jacket to protect themselves from the elements and that’s because of our mayor and our board,” he said.

Daughtry has approached some businesses for donations to the Natchez Police Foundation in order to make purchases that are needed but weren’t included in this year’s police department budget.

“A lot of people don’t understand why we have asked for donations to fund some of the stuff that we are doing. It’s not that we are out here just begging, but you guys have checkbooks. You know how it goes. You can’t get blood out of a turnip,” he said.

Those donations are needed to buy special bulletproof vests for SWAT team members, as well as fund training for new officers and other equipment needs.

“I am thankful to be the chief in Natchez because every time we go somewhere, people ask me, ‘What can we do to help you?’ There are people that support this community and that’s so important to law enforcement.”

Daughtry explained his officers will work from a perspective of treating all citizens equally and they will work to earn respect.

“I want you to understand something. Some communities, some cities, people are rooted in the community and because their grandfather fried the first piece of chicken in the community, they think they can do what they want to do. It doesn’t work like that anymore. We have to be fair,” he said. “If we can help you, we will help. Everybody deserves a little help every now and then. But we are going to be straight across the board — across all genders, all economic barriers, racial barriers. We are going to treat folks right until they don’t allow us to treat them that way. Now I’ve told my officers, ‘You are a Natchez Police officer. You don’t take no crap off nobody.’ We want our people to be safe and we want people to respect the City of Natchez.”

He discussed the city’s economic growth and vowed he will be a part of that growth in a positive way.

“Natchez is a beautiful place and we are going to help build this economic development because one thing I learned in my crime prevention schools before businesses come they look at two things. They look at your school district and they look at your crime rate. Those are two elements that entice businesses to come to your community. I am going to do my part. I have met with the school administration and they are doing their part.

Daughtry said his office is open to any resident.

“I want to be your chief. My office is open to you,” he said. “You are not going to like everything we do. And we are going to make mistakes. We are human. But when we make a mistake, we are going to own up to it.”

Daughtry said he has officers eager to go the extra mile and through the new VIPER unit have made progress in fighting crime.

“We have gotten so many guns off the streets and arrested so many convicted felons. We can go even further with your help…Lock your cars. Lock your doors. Make sure you are aware of your surroundings.

“We need to go back to being nosy neighbors. If you know your neighbor Mr. Johnson next door only has a red truck and you see a blue F150 at his door backed up, call us. I would rather send an officer over there and find out his son just came home from school than find out somebody has moved his stuff out.”

He said he wants citizens to know when they see the police conducting a checkpoint, that it’s their tax dollars at work fighting crime.

He asked residents to keep him and his officers in their prayers.

“We have a difficult job. During COVID, lots of you can shut down or work remotely. We can’t shut down. When the phone rings, we have to get it.”