Rebels start season off on wrong foot, battle back 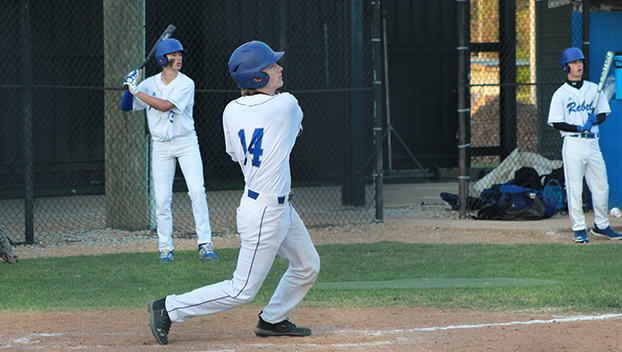 AMITE, LA — Adams County Christian School opened their season on the wrong foot as Oak Forest scored seven runs in the first inning, and ACCS made seven errors in the game. The Yellow Jackets held on to win 8-6 Thursday night.

Head Coach Jake Winston said the team battled back from a rough start. All seven errors came in the first two innings and put them in a pretty deep hole. In the final inning, they had a tying run at the plate.

“It was our first game of the year, and we had a lot of young guys out there. They had the first-game jitters,” Winston said. “After the second inning, we played good ball and battled back. We were down 7-1. It is always easy to quit and lay down, but these guys battled back. I was telling the guys after the game, ‘there are some great moments from this game. One of them is you never gave up.’”

AC’s dugout kept their energy the entire game, and the young players seemed to mature as the game went on. He started three eighth-graders Thursday night.

DK McGruder, a transfer from Natchez High, is AC’s only senior this season. He had not seen any live pitching in about a year until Thursday night because he plays basketball. Winston said he adjusted well after striking out in his first at-bat.

His timing was off at first, but by his third at-bat, he was making contact. In the seventh inning, he nearly led off the Rebels with a base hit on a line drive, but the baseball hit the pitcher in his leg, and he threw DK out at first.

“To see the adjustments. It was awesome to see,” Winston said. “He is a super awesome guy and such a great leader in the school halls and the field. You want him on your team. It doesn’t matter if you are playing ping pong or baseball. He is our lone senior, and I expect big things from him this season.”

AC may have found another leader in junior Connor Aplin. He was 3-3 with a home run and two RBIs and had a lot of confidence at the plate. Winston said he drew a walk and reached base on all four plate appearances.

“I hope he can continue to step up when the team needs him. I think he sees himself as a leader,” Winston said. “We have a lot of young guys behind him, and I think he will fill that age gap.”

Sophomore Coleman Carter pitched 4 ⅓ innings of relief and gave up one hit.

AC returns to action Monday when they travel to Brookhaven Academy. The first pitch for JV is 4 p.m., and Varsity is 6 p.m.