‘The community pulled through’ with donations, sheriff says 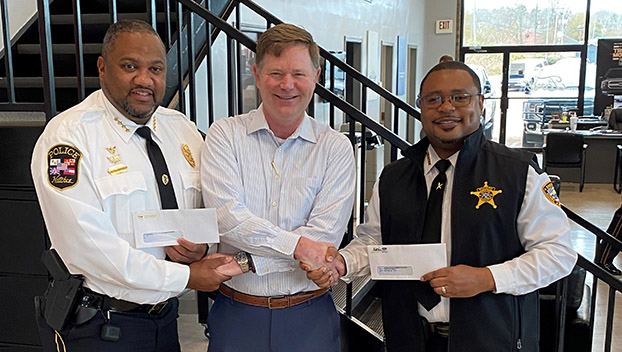 NATCHEZ — Approximately two weeks ago, Adams County Sheriff Travis Patten sent out a letter to the community asking for their help raising funds for roughly $28,000 worth of protective gear.

Since then, business owners and individuals who have asked to remain anonymous have answered the call, he said.

Patten said the money for replacing worn-out, bullet proof vests would typically come from federal grants his department applies for each year as well as from funds raised at the annual Sheriff’s Rodeo. However, those funds have been either reduced or cut out completely and the rodeo has not taken place for three years due to COVID-19, he said.

Brad Yarbrough, the owner of Natchez Ford and Mississippi Auto Direct automotive dealerships, was one of several who stepped up to fill the department’s need, Patten said.

“These officers work tirelessly and put themselves in danger every time they leave their families to go to work protecting this community,” Yarbrough said. “When I heard the need for bullet proof vests from the Adam’s County Sheriff’s Department, I knew we needed to do all we could to help. If this keeps one officer safe to come home to his or her family, the investment is worth it. Their commitment to keep our community safe deserves the same reaction from us to keep them safe. It’s an honor for us to be able to be a part of doing so.”

Patten said the reason he sent out a letter asking for donations rather than asking individuals is because he didn’t want to put any pressure on any one person to help.

“Mr. Yarbrough stepped up and several others who do not want their names put out there and we were able to meet that goal,” Patten said. “What has happened since then is people have called and said ‘What other equipment do you need?’ We were able to order the vests (Friday) and gas masks today and a few more items.

“I’m not asking, but if people still want to help our next goal is to get updated body cameras for our deputies. Our body cameras right now are five years old and about to go obsolete within the next year.”

Patten said the nationwide Defund Police Movement has caused anxiety for law enforcement. He added the way people responded to his request for help has restored his department’s peace of mind and their faith in the community to back them up.

“If it wasn’t for them, it would have been harder for my deputies to sleep at night knowing our vests have expired and the money to replace them wasn’t there,” he said. “I asked and the call was answered in a major way. That sent a ripple effect and instantly boosted morale.

“Just to know that they still support us, that meant the world to these officers. I am extremely humbled and grateful and extremely appreciative of every single person that came through in our time of need. I am proud and it is truly an honor to be their sheriff.”