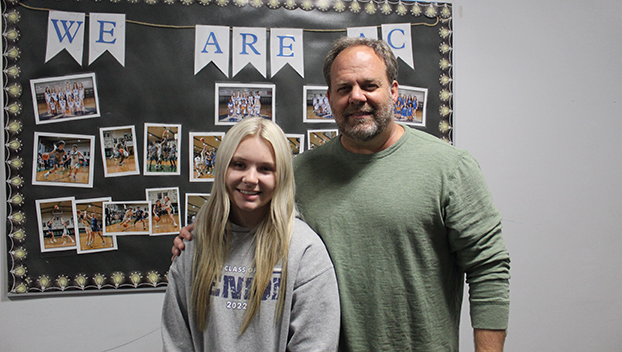 Brooklyn Timmons did not want to make a big deal about her next chapter in athletics. However, AC headmaster David King stopped by for a photo as Timmons will play soccer at Southwest Mississippi Community College. (Hunter Cloud | The Natchez Democrat)

Timmons played soccer and tennis at ACCS. She decided to further her career at Southwest Mississippi Community College in Summit, Mississippi. Several of her cousins live close by, she said.

“I was going to go there anyway. I enjoy playing soccer, and they had an ID camp, and their coach watched me play,” Timmons said. “I went and practiced with them, and their head coach reached out to me. I decided to play there.”

If she can continue her soccer career in senior college, she would love to, she said. At Southwest, she will study nursing to become an RN. She likes to help people.

Her soccer journey began when her mom signed her up for the Morgantown recreation team. In 7th grade, she played at Cathedral, and in 9th grade, she transferred to ACCS, where she played through her senior year.

In 10th and 11th grade, she played club soccer and a year in the Vidalia recreation league with an ACCS team. Soccer is a way she can get her mind off of life. It is fun, and it can be a peaceful outlet.

Her favorite soccer memory at ACCS was beating Cathedral twice her senior year. The first win was at Cathedral, and she scored the winning goal en route to a 4-1 victory.

“I was crying after the game because it was my senior year, and I was excited,” Timmons said. “I want to thank my coaches and my family. My teammates and God for giving me this opportunity.”

Green Wave jump out to strong start against Amite…