Green Wave jump out to strong start against Amite School Center, fall in 10 innings to Silliman 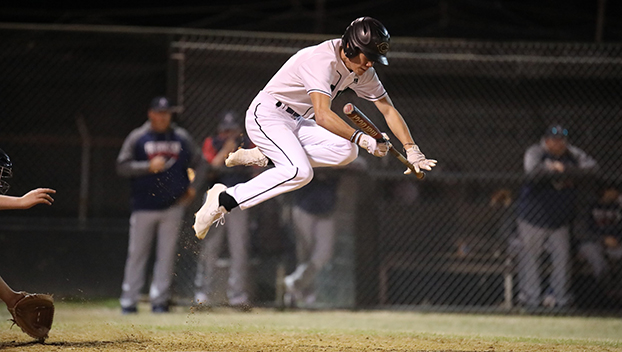 Cathedral's Harper Jones jumps out of the way of a low pitch Friday night against Amite School Center. The Green Wave jumped out to a 13-1 win over Amite before losing in 10 innings to Silliman Institute Saturday. (Jody Upton | Green Wave Athletics)

CLINTON, La. — A bases-loaded walk with two outs in the bottom of the 10th inning capped off a stunning comeback by Silliman Institute as the Wildcats defeated the Cathedral High School Green Wave 6-5 Saturday afternoon.

“I was really pleased with the start of the game. But we couldn’t close it out in the sixth and seventh innings,” Green Wave head coach Craig Beesley said. “I was kind of disappointed that we sat on that 5-0 lead. I thought we could have added a couple of more runs to give us some separation.”

Cathedral scored one run in the top of the second inning when Zeke Flattmann singled in a run on an 0-1 count. Maples, Noah Russ and Harper Jones each had RBIs in the Green Wave’s four-run barrage in the top of the fifth.

Russ went 2-for-5 with one run batted while Tyler Gregg was 2-for-5. Wimberly had a double, but went just 1-for-4 at the plate.

“Noah, Tyler and Tanner are swinging the bats real well right now,” Beesley said. “Tanner swung the bat well, but we had nothing to show for it. He hit line drives right at them.”

Russ got the start on the mound for the Green Wave. He pitched five shutout innings before allowing one earned run in the bottom of the sixth. Overall, he gave up four hits, walked two, struck out four and hit one batter over five-plus innings. Mason Moore came on in relief and gave up one earned run on two hits and one walk.

Maples entered in relief of Moore with two outs in the bottom of the sixth. Maples pitched what should have been no more than one and one-third inning of relief with Cathedral leading 5-2. Instead, he gave up three earned runs, two of them on a single, in the bottom of the seventh. He wound up going three and one-third innings and gave up three hits, walked seven, struck out five and hit one batter.

Then Tanner Wimberly came on in the bottom of the 10th and struggled with his control. He only struck out one and walked four in two-thirds of an inning. He was charged with the loss.

Silliman’s starting pitcher (no name given) went the distance. Even though he allowed 10 hits, he struck out 14 batters, walked just one and hit one batter.

Cathedral (2-1) travels to Vicksburg to take on Porter’s Chapel Academy with JV game at 4:30 p.m., followed by the varsity game at 6:30 p.m Tuesday night.

Hairston gave one unearned run and one base hit in the top of the first inning. He allowed just one hit over the final three innings. He also struck out five and walked one.

“I thought Jake threw well for his first time pitching this season coming out of basketball,” Beesley said. “He had good control and we had good defense behind him.
Wimberly homered in the bottom of the third inning to help give Cathedral a 5-1 lead. The Green Wave scored eight runs in the bottom of the fourth to end the game on the 12-runs-after-four-innings mercy rule.

“I thought we played well offensively and defensively,” Beesley said. “We got a lot of hits. Tanner had a big home run for us in the middle of the game.”

Jamie Morris was charged with the loss after giving up nine runs, all of them earned, on six hits with five strikeouts, three walks, and one hit batter in three and one-third innings pitched. He also drove in a run after Zane Minton reached on an error in the top of the first inning.

Trojan to continue career at HBCU in Ohio