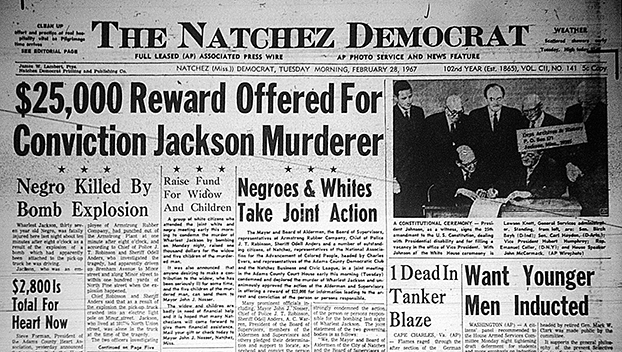 Watch the trailer below.

It explores a federal cold case investigation of the murder of Wharlest Jackson Sr., who was the treasurer of the Natchez branch of the National Association for the Advancement of Colored People until his assassination by a car bomb.

“American Reckoning” also examines Black opposition to racist violence in Mississippi by spotlighting a little-known armed resistance group called the Deacons for Defense and Justice, woven alongside the Jackson family’s search for justice.

The show features the award-winning Natchez historian Ser Shesh Ab Heter C.M. Boxley as well as archival film footage from the civil rights era — much of it never-before broadcast — from filmmakers Ed Pincus and David Neuman and made available through the Amistad Research Center. The documentary also taps into the groundbreaking reporting of the Concordia Sentinel journalist Stanley Nelson, who investigated allegations of the involvement of a Ku Klux Klan offshoot known as the Silver Dollar Group in Jackson’s murder.

“American Reckoning” is part of PBS’s many FRONTLINE Production’s, with 371 Productions in association with Retro Report, and also the latest component in FRONTLINE’s ongoing “Un(re)solved” project, which is a multiplatform investigation of the civil rights era cold case killings that includes a web interactive experience; podcast mini-series; an augmented-reality installation that can tour schools, libraries, and museums; a companion educational curriculum; and events.

The producers, writers, and directors are Brad Lichtenstein and Yoruba Richen. The executive producer for Retro Report is Kyra Darnton.

This journalism is made possible by viewers. To support your local PBS station, visit www.pbs.org/donate .