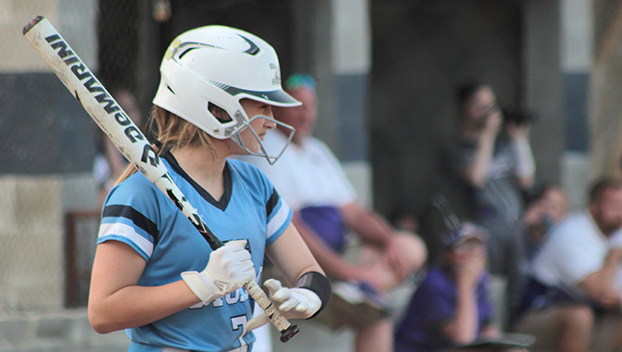 Delta Charter lost sophomore Lily McCarthy before the start of the school year on August 17, 2022 in a car accident in Ferriday. Here she is at the plate last year in a game against Mangham. McCarthy was described as sassy and bossy by her coaches. (Hunter Cloud | The Natchez Democrat)

FERRIDAY — Delta Charter took a step in opening its 2022 softball season with a jamboree Saturday afternoon. Block and Red River Charter played the Storm in what was best described as a “glorified practice,” Storm head coach Jeanie Crnkovic said.

The jamboree was the first time the team had taken the softball field in competitive action since the death of sophomore teammate Lilly McCarthy. She died August 17, 2021 from injuries sustained in a car accident on Louisiana 903 in Ferriday.

Her teammate Rami Burks first met Lilly when they were six playing on a T-Ball all-star team. Burks played first base and McCarthy played shortstop. They were a dynamic duo, she said. She learned of the accident because one of her friend’s parents worked the wreck.

“They said she wasn’t going to make it … It was a shock,” Burks said. “She was a fighter. She always stood up to the challenge. For them to say there wasn’t a chance, it was hard for everybody.”

They had a close connection on and off the field. Their birthdays are four days apart and they had always wanted to play together, she said. In Seventh grade, they got the chance to play together at Delta Charter.

Burks said Saturday was a bit strange because she was not on the field physically. She was there in spirit but the team’s chemistry was not the same. Loud, silly, crazy, fun, personable and loving are all ways Burks described her friend.

Sassy, bossy and energetic was how Crnkovic and her assistant coach Milah McGraw described McCarthy. She had a love for the game of softball, McGraw said. It is what reminded Crnkovic said she was a lot like herself.

“I always called her boss because she was a leader in some ways. She might have been younger or smaller. She had some leadership abilities and was a lot like me,” Crnkovic said. “She liked to be bossy. She knew the game well. She would help a lot at our softball camps in the summer and taught players the correct way to play.”

McGraw said there was seldom a time where McCarthy was not sassy.

“She was always sassy, except for maybe when she was asleep in my truck on the way to away games,” McGraw said.

Her father Brent McCarthy worked closely with her at practices and made her the player she was, McGraw said. It was an instance where a kid was already good at softball and the coaches could just build upon it, she said.

McCarthy’s family was in regular attendance for games. “I know it has to be difficult. They are more than welcome to be a part of the team,” Crnkovic said. Her father came to one of the practices before the jamboree.

This season, the squad will wear special patches with the Delta Charter logo and Lily’s name on their uniforms. In her 23 years as an educator and nine years as a softball coach at Delta Charter, McCarthy is the first player she has ever lost.

She was more than a player, or a student in her PE class. Crnkovic knew McCarthy’s dad in high school so it was in a lot of ways like losing a family member.

“The girls had a long talk about her yesterday. It is still so fresh and new. Some days we just talk and talk about her. The different memories we have,” Crnkovic said. “As a coach you have a player you are dependent on. She was my second baseman and now I have to find someone to take her place on the team. I just wish she was here.”

At the end of last softball season, McGraw and Crnkovic were arguing about where they would play McCarthy. They were torn between centerfield and second-base. Now, some of the girls are struggling to play those positions.

“They feel like they are taking her spot,” McGraw said.

At the end of the 2022 season, Crnkovic hopes to be in Sulphur, playing in the state playoffs. She will need all 13 of her girls to stay healthy and a good majority of her squad are young.

Her goal for those young players is to teach and improve. The jamboree helped with that by putting players in real game situations. Some of the girls learned rules about baserunning, she said.

McCarthy’s spirit and memory is motivation for the squad to accomplish their goals this season, Burks said.

“We are doing it for Lilly,” Burks said. “We are trying to do everything for her the way she wanted it to be done. There wasn’t a moment last year where she wasn’t up in the middle of the action with us.”

Delta Charter opens the season Thursday, Feb. 24, at Grant with the first pitch at 5 p.m.

Green Wave jump out to strong start against Amite…