Homeowner confronts suspicious person at his house, suspect runs away

NATCHEZ — On Saturday night, a man was standing just outside his home in the 100 block of Seargent Prentiss Drive when his young son ran outside to tell him that a strange man was inside their house, Natchez Police Chief Joseph Daughtry said.

Daughtry said the homeowner immediately ran inside, armed himself and confronted a suspicious man who he found standing on their back patio.

“The suspect told him, ‘your mom told me I could stand here (on your patio),’” Daughtry said. “When the homeowner told him he was calling 911, he fled on foot.”

Daughtry warned area residents to always keep their homes and vehicles locked and make sure their weapons and valuables are stored somewhere safely out of plain sight.

Daughtry said on the same evening, another person reported a gun had been stolen from their vehicle, which was parked at his home on Seargent Prentiss Drive. However, it’s unclear if the weapon was taken from there.

“He said he’s not sure where he was when it was stolen,” Daughtry said. He added surveillance cameras did not show anyone tampering with his vehicle.

“We are having individuals still not locking doors and leaving their guns on the front seat of their vehicles,” he said. “Please lock your doors and do not leave valuables or weapons out in plain sight. We have reports of people leaving guns in the front seat or between the seat where the butt of the gun is still visible.” 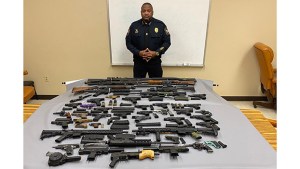 Submitted photo
Natchez Police Chief Joseph Daughtry is pictured with dozens of weapons that were confiscated in recent months. Daughtry says many of them could have been stolen and asked residents to keep a copy of their weapons’ serial numbers somewhere safe in case their weapon is stolen.

Daughtry said another way to help with the recovery of stolen weapons is to keep a copy of the serial number in a safe place to give to law enforcement when a weapon is missing.

“We can identify a weapon as stolen without the serial number,” he said. “Keep it on your phone or in a safe place.”