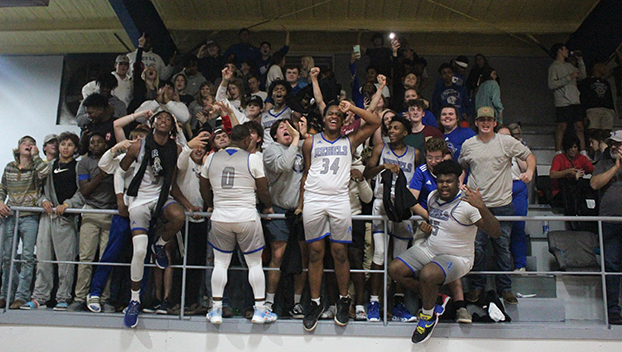 A bus load of 40 plus students helped cheer the Adams County Christian School Rebels to victory over Heritage Academy Wednesday night. AC won the game 43-33 after trailing 13-10 at halftime. The students played a crucial role in the team's performance. (File photo | The Natchez Democrat)

NATCHEZ — Adams County Christian School eliminated Heritage Academy Wednesday evening with a 43-33 win. The Rebels overcame a three-point deficit at the half to win the game.

The 40 plus students who traveled on a fan bus to Brookhaven Academy to support the Rebels were a big help in their second-half rally. Head Coach Matthew Freeman said if the same amount of kids wants to go Friday for AC’s game against Starkville Academy, they might be able to get another fan bus set up.

“The kids showed up, and their energy helped us play well,” Freeman said. “I don’t know if we could have won the game without them. The environment they created helped cause problems for the other team. It was much needed. I appreciate it.”

Heritage Academy came into the game defensively with a man-to-man scheme and caused problems for the Rebels offense. AC struggled to handle pressure at the start of the game.

Fortunately for AC, they played good enough defense to keep the game close. He said if Heritage Academy had made some shots to start the game, it could have been ugly.

At halftime, the Rebels made some adjustments offensively. They ran a more motion-based offense in the second half. By moving and setting screens, they got some better looks. After going up eight or nine, Heritage had to foul, and the Rebels made their free throws.

“They tried to take out Tiqi with three defenders. He could penetrate, but in the second half, he did a better job of finding others,” Freeman said. “We have improved at the free-throw line. We have improved so much. Now, I don’t look away when we shoot free throws.”

Kamron and Kyron Barnes did their part by going on an 8-0 run, which sparked the squad. Jamar Kaho Jr made two dunks in the second half to get things going for AC.

AC will play Starkville Academy at 7:15 p.m. Friday in the State semi-final at Brookhaven Academy.

Andrew Howell coaches the Volunteers. He played on the All-Star team with Freeman in high school. Starkville Academy is a well-coached team and runs a man-to-man or 1-3-1 zone defense similar to Heritage Academy.

“When you make it to the final four, everyone is playing well. Everyone provides their own type of strategy, and each team is different. Each matchup is different,” Freeman said. “Winning today guarantees us two more games. If we win Friday, we play for the state championship. If we lose, we play in the third vs fourth-place game and the winner of that advances to the overall tournament. I’m proud of the effort they played with and the energy they had today.”