All on the court: Lady Trojans fall in Bi-District round in first season back from COVID 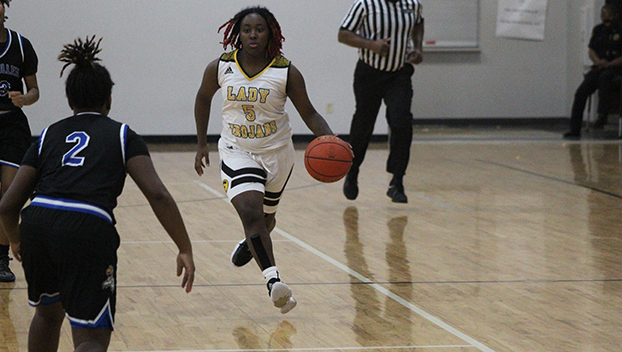 Lady Trojans senior Aaliyah Gray drives down the court in the second half. Ferriday would lose to Port Allen 51-43 in the LHSAA 2A Bi-District round despite her 17 points Thursday night. (Hunter Cloud | The Natchez Democrat)

FERRIDAY — No.18 Port Allen’s Braylah Pierson scored 24 points as they ended No.15 Ferriday’s season in the LHSAA 2A Bi-District round 51-43. Aaliyah Gray led the Lady Trojans in scoring, with 17 points, a fitting performance for the senior who has spearheaded the team’s offensive attack.

Ferriday led 27-25 at the half but gave up 14 points in the third quarter to fall behind 39-34 and could not recover. Head Coach Lisa Abron said her team got into foul trouble, and Port Allen took advantage of inexperienced players on the court.

Kennedy Matthews had four fouls, Shekayla Miller had four fouls, and Gray fouled out with five fouls. As she walked off the court and took a seat on the bench, she put her head in her hands. Abron patted her on the back and consoled her.

Matthews came out of the locker room and hugged her family closely as tears rolled down her cheeks. She was not supposed to play after rolling her ankle Tuesday but did anyway.

“She stepped up exceptionally. I wasn’t expecting her to play. I was proud of the fact she did,” Abron said.

Miller’s family asked her to keep her head up as she walked out of the gym. She scored eight points for the Trojans.

Gray was the last Trojan to come out of the locker room. Red hair covered her face, but her voice was teary as she spoke.

“It hurts. This was the last game I had with my teammates. I’m going to miss having fun and scoring,” Gray said. “When I fouled out, it hurt. I knew I couldn’t do anymore. I tried my best.”

She will be headed to college when she graduates this spring. Grambling is the likely choice, although she hasn’t decided fully yet. She would like to go into accounting, she said.

Ferriday made it to the playoffs after missing a year of games and practices due to COVID-19. Abron said her team had three or four players get COVID this year.

“I hate to see my seniors go out in a loss like that. We faced all types of adversity this year,” Abron said. “I couldn’t expect nothing more or less out of these girls. I’m proud of them. I love them. We have been through a lot. ”

Monterey’s season came to an end against Stanley as they fell 42-29 Thursday afternoon. Homer defeated block 55-33 and Sicily Island lost 55-20 to Grand Lake Thursday night. No score has been reported for Delta Charter.