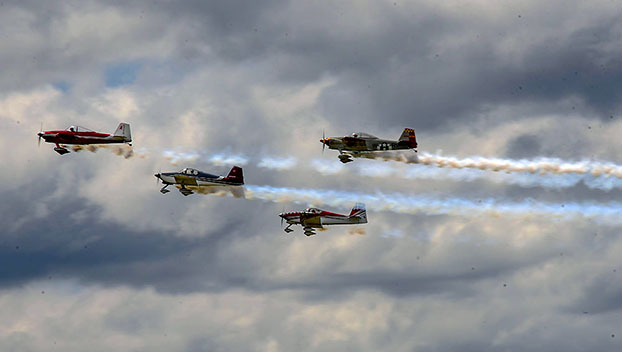 A group of airplanes put on an impromptu show during the March 2021 Fly-In at the Natchez-Adams County Airport. (Ben Hillyer / The Natchez Democrat)

NATCHEZ — Natchez-Adams County Airport Director Richard Nelson told the Mayor and Board of Aldermen recently the airport is a diamond in the rough and updated them on efforts to secure grants for improvements of the facility as well as to secure a commercial airline.

Nelson said a recent study showed more than 800 people a week are buying airline tickets and flying out of other airports, who could be flying out of Natchez if the city had a commercial air carrier.

He is preparing a grant application through the U.S. Commerce Department, which is available to communities seeking a commercial air carrier.

“It’s a $1 million grant, which requires a 20 percent local match, which is only $200,000,” he said. But Nelson said of the 61 people who applied for the grant last year, 15 communities received it and none pledged only the minimum of 20 percent. The grant establishes a contingency fund that serves as risk mitigation money for the prospective airline. That money is only tapped by the airline if what the number of seats they project filling aren’t sold after they begin offering the service.

At a recent meeting, the Adams County Board of Supervisors pledged $100,000 from its American Rescue Plan funds toward the grant match. However, Natchez Mayor Dan Gibson hopes to convince the county to pony up additional dollars. Gibson has called a meeting of an airport task force for March 1 at 10 a.m.

“We will treat this as a special-called meeting of the Board of Aldermen and will invite the county board of supervisors to attend to discuss the grant application,” Gibson said.

He said he would like to see the county up its contribution to the grant match.

“The county got significantly more ARP funds than the city did. I would like to see them go $300,000,” Gibson said.

Nelson said he is attending a conference this week to secure a letter from a commercial carrier indicating the carrier’s interest in providing flights into and out of Natchez.

“We are in a really good spot. I have to get a letter from the airline in support that says if we apply for the grant and get it, they will think about coming into Natchez,” he said.

Nelson said the airport would like to attract a carrier that would offer flights into and out of Houston.

“That’s what I have to do next week. I have a lot of work on my end, but I don’t see that that is going to be a problem,” he said. “We have to have that local contribution and an established public private partnership, something that says we are all going to work together to make this a success.”

Nelson also told the mayor and aldermen about a grant from the Mississippi Development Authority aimed for cities in communities that have a casino. The MDA grant, which could be as large as $2.5 million, does not require a local match.
“The grant was written for Gulfport,” he said. “Gulfport does not have a need this year and tunica is not asking for the money.”

The MDA grant has a fall deadline for application and is awarded the following spring. The deadline for the federal grant from the U.S. Commerce Department is March 15.
“Between the two grants and the study, Natchez is in a prime position to capture an air carrier service,” Nelson said.