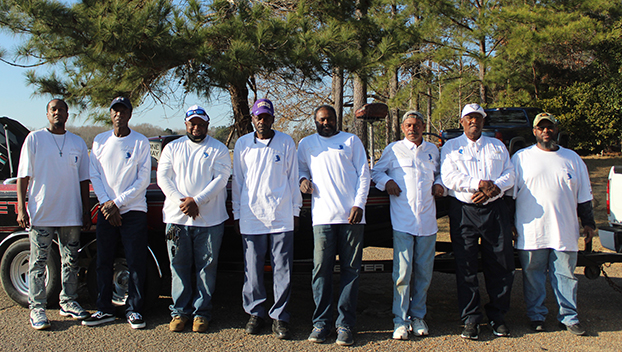 At one point in time, Kingsfisherman Bass Club had about 30 members. As time has marched on, members have died and a couple have quit. Now, the club has about 10 active members. From left, Paul Baker, chaplin Theodore Walker, Sam Minor Jr, Willie Morris, president Jerry Brown, Andrew Rounds and Jermaine Minor. (Hunter Cloud | The Natchez Democrat)

The men were here to fish and to reflect on the club’s history.

It is a golden anniversary for the bass club which started in 1972 due to racial tension on the Miss-Lou lakes, Club President Jerry Brown said.

Brown, who has been a member for 30 years, said he believes the club has stuck around so long because members had to stick together back then. He said they are one of the oldest bass fishing clubs in the Miss-Lou. At one point, the Club was about 30 members strong; those numbers have since dwindled to 10.

A couple of members have quit, but most were active in the club until the day they died, he said. Founding members were Jerome Frye, James Payne, Willie Russel, Ben Johnson, Addis Marshall, Will Dixon, James Crawford and Sam Minor. A lot of them were employees of Armstrong Tire or International Paper company.

“I never bass fished. I hated fishing but one day I bought an aluminum boat to fish for crappie. I couldn’t even cast a reel or rod,” Rounds said. “I never was good at fishing but I enjoy doing it. I try to fish, I’m 86 now. I still try to fish but it’s not as regular. I enjoy it, nothing beats hunting besides this. The camaraderie means a lot too.”

Brown said he suspects another reason the club has stayed together for 50-years is due to several deacons and pastors in the club. The Rev. Theodore Walker was nominated by the club as their chaplain.

He has been there for the past 40 years and once became angler of the year in a small Terry Bass Boat. It had a little motor with a stick in it, he said. His duties are to pray for the fishermen at meetings, before fishing and to encourage them in life.

“I enjoy being out here with these guys and encouraging one another,” Walker said. “I enjoy smelling the gas and oil burning in the morning. I’m good if I don’t catch a fish. I love being out here.”

Usually, they host a special family outing at the end of each year to thank the wives for letting them fish. At one point in time, they sponsored a baseball team. Jennings Little League. While the club members pay monthly dues, they aren’t a whole lot, he said.

The money usually goes into the big bass pot for the end of the season. They fish in 10 tournaments and standings are put together based on a point system for how they finish in each tournament.

Whomever gets the biggest bass receives a trophy and a check as does the person who catches the most big bass. Their fishing tournaments are in Mississippi, Louisiana and Texas.

Amazingly in his 44 years with the club, Rounds said he had never finished in first place at a tournament.

“I always came in second or third, but I just enjoy fishing with the guys,” Rounds said. “I never knew anything about fishing. It is all trial and error. I would take nothing for it. I even gave up my hunting for it.”

Willie Morris joined the club about 9 to 10 years ago. His neighbor introduced him and it gave him something to do once he moved back to Natchez. He grew up bass fishing and found it to be relaxing.

To join the club, a person once had to be recommended by a current member. Now, they would take anyone. Bass fishing could give younger people something to do and they could earn a scholarship to college, Morris said. Getting new members is needed to keep the club going another 50 years, Brown said.

“If we can get some younger members in the club it would be great,” Brown said. “We would love to be able to pass the torch on.”

Rounds quipped he wouldn’t be here another 50 years but was happy to see the club reach its 50th anniversary.

“Time flies. We are holding together good and we are still going good,” Rounds said. “It makes me want to get up in the morning.”

Loss of an icon: Bobby Marks leaves behind champion…