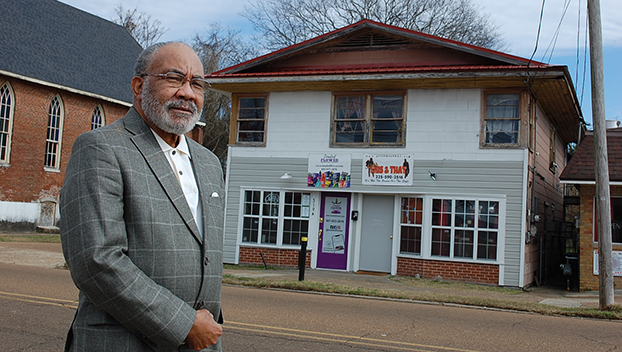 Willie Carter of Natchez stands in front of the two-story building that once served as the command post for the Deacons of Defense and Justice in Natchez. Carter is the current owner of the building which is now home to two small businesses. (Submitted photo)

NATCHEZ — In the 1960s, a crucial time for civil rights, the two-story wood-frame building at 319 North Dr. Martin Luther King Jr. St. became a key meeting place for the Deacons for Defense and Justice in Natchez, according to local historians.

It is the site where the Deacons worked with President James “Big Jack” Jackson, a barber in Donnan’s Barber Shop housed on the first floor, Ser Seshsh Ab Heter-Clifford M. Boxley, said in a recent interview.

Boxley described the building as a command post — “the hotbed workplace” of Jackson, the founder of the Natchez Deacons and “an observation point” for keeping an eye on the Ku Klux Klan.

“The building played a pivotal role where militants gathered to talk and plan actions in the Natchez civil rights movement and observe the KKK located in a store directly across the street,” he said.

The building is one of several sites being reviewed by the Natchez Civil Rights Site Committee as a possible location for a Mississippi Freedom Trail marker. The other sites include the Dr. John Bowman Banks Museum and Adams County Courthouse.

Boxley, a recognized authority on African American history, said the building holds an important place in the civil rights movement. It was through the fearless commitment of the Deacons, he said, that African Americans found courage and a practical way to survive and succeed in the struggle.

The late Jessie B. Bernard-Williams, then-secretary to Charles Evers of the Mississippi State NAACP, reportedly told him that “we felt safe with the Deacons protecting us in the streets.”

The Deacons for Defense was an armed group of African Americans who provided protection for civil rights workers. The organization was first organized in 1964 in Jonesboro, La., in response to the terror and violent acts of the Ku Klux Klans against civil rights activists. The Deacons, many of whom were actual deacons in the church, carried firearms for the protection of the activists, as well as for themselves.

“The contributions of the Deacons were second to none,” Boxley said, noting the workers used a three-point model in their protests. “In addition to armed defense, they used economic boycott of businesses owned by whites and enforcement of adherence to the boycott in the black community,” he said.

The success of the movement in Natchez has been noted by a number of scholars, including Lance Hill, author of The Deacons for Defense (2004). He stated: “The Natchez campaign was the single greatest community victory for the Civil Rights movement in Mississippi.”

According to Jeremy Houston, local historian, the Deacons in Natchez were believed to be bolder and more radical than those in other places. The men were eager and always ready to take action, he said.

Willie Carter, current owner of the building, was young when he worked at the site in 1962 as a shoe-shiner. At the time, the building was owned by Leon Donnan.

Carter said he would like to see the building recognized for its role in the civil rights movement. In addition to being a meeting place for the Deacons, it also was the site of the first meeting held by the Council of Federated Organizations or COFO. The group met in 319C, he recalled.

Bobby Dennis, executive director for the Natchez Museum of African American History and Culture, described Carter’s building as a safe haven for people who needed protection, especially those who faced threats by white supremacists.

“I practically grew up in that barber shop,” Dennis recalled. “My dad, R.L. Dennis, had the first (barber) chair in there. From my personal observations of everything that went on along St. Catherine Street, no one would ever come into that barber shop and harass any individual. It was untouchable.”

Dennis said that as a child, he didn’t really understand all that was happening, but he later learned that the building was respected because of the Deacons’ armed protection.

Carter said the site needs to be recognized, whether by Freedom Trail marker or other type of historical designation.

Ser Seshsh Ab Heter-Clifford M. Boxley and the Deacons for Defense and Justice in Natchez are featured in PBS Frontline’s “American Reckoning,” Season 2022 Episode 1, which aired Tuesday, Feb. 15, 2022. It can be viewed at pbs.org/video/american-reckoning-assg68/