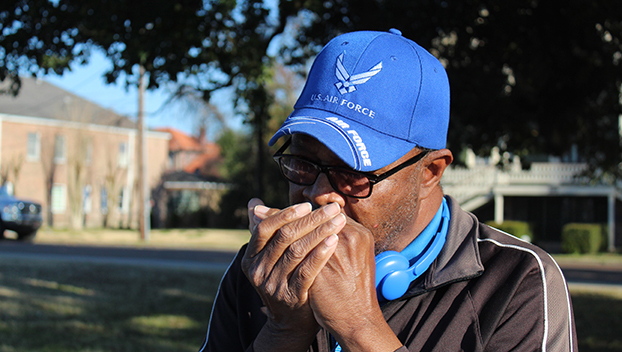 Sherman Purnell plays the harmonica as he looks out from the Natchez Bluff towards the Mississippi River. Purnell served for 24 years in the US Air Force where he gained an appreciation for the freedom America has to offer. (Hunter Cloud | The Natchez Democrat)

NATCHEZ — Sitting from a bench on the Natchez Bluff, Gulfport native and Roxie resident Sherman Purnell looked out at the river, tugboats, passing people and cars going down silver street close to where The Dart landed Tuesday.

He wore a blue Air Force Veteran hat, a testament to the 24 year he served before retiring in 1998. He doesn’t like to go into the specifics of what he saw during his service, however his time in Turkey has given him the ability to appreciate what America has to offer. He lives life by six words a Navy chaplain once told him.

“Find the good and praise it,” the chaplain had said.

Natchez’s bluff is good as a place of relaxation, rest and reflection. It is open and full of diverse people walking by. Some of them are musicians, a retired Walmart worker or a school teacher. Once, he was playing his harmonica at the base of an oak tree in a section close to Rosalie. Some people working on a documentary about people living along the Mississippi River asked to record, he said.

“The bluff has its occasional surprises. Sometimes you meet people who are facing different challenges. It is a place where something will peak your interest,” Purnell said. “For me it’s the history, the people, the open air setting, the trees. My hat is off to whoever planted them.”

Three to four days a week he will come out to the bluff and watch tugboats working up and down the river. He carries a keyboard in his car, a Yamaha 300, and a power pack to plug it in. At a picnic table, he will face the river and just play music, losing himself in the moment.

In his pocket he carries a blue harmonica. Its lonesome sounds are not as inviting as the keyboard. His keyboard grabs people’s attention.

When he is playing music he doesn’t pay attention to what is going on around him. While people occasionally ask him to play specific songs, he mostly plays for himself. Although once a 60-year-old couple asked him to play You are my sunshine on a harmonica. They started singing from memory, he said.

“I appreciated watching them be able to sing a song without practice,” Purnell said.

His grandson Christopher, who is now at Mississippi State, has played drums since he was little. That was how he reconnected with music again.

He moved to Roxie in 2013 and started coming to the bluff in 2016. From his perch over the river, he has written a song about a tugboat which has the rhythm of its humming engines. His friend Lizzie Davis, who has lived in Natchez for 74 years, met him while he played music on the bluff.

She likes to take walks with her wooden cane and had strolled over to Rosalie in early June when a black bear had taken a stroll over there.

“I patted him on the back and told him we had seen the bear over here,” Davis said. “I didn’t want him to get attacked by the bear. We have become friends since then. He didn’t care about anything but his music.”

While he can be focused on playing his keyboard or working on a new song, he also finds enjoyment from meeting new people. If a person comes up and says hi, he isn’t afraid to talk to them about anything.

With glasses and gray stubble, wisdom flows from his mouth. He can talk about anything from how young people should approach careers, to how people should consider their choices and appreciate the beauty in front of them.

He watches as the sun sinks behind some grain elevators on the Vidalia side of the Mississippi River, south of the bridge. It concluded another day flying round the sun. Once, a granddaughter told him she was scared of flying, but she didn’t see life the way he did.

“I told her on your tombstone they put the day you started flying and the day you terminated your flight. Even then you are still flying,” Purnell said. “Find the good and praise it. You can always find the positive. This bluff is a great example.”