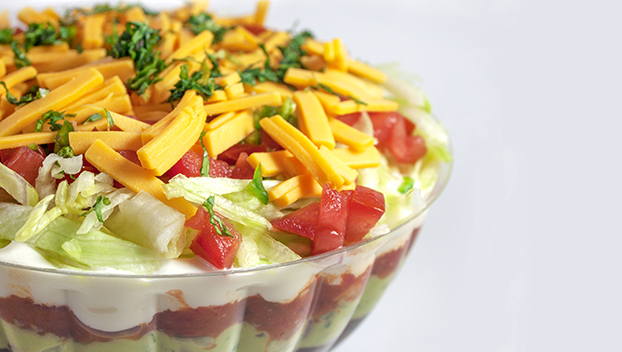 This past weekend, the Guidos were tuned into one television event – the 56th  Super Bowl between the Rams and Bengals. Since we’re a bit of an LSU-obsessed home, you can guess who we were cheering for.

During the AFC Championship Game, when the field goal kick made it through the uprights during overtime, I promised Dad I would make a dip for him for the big game. That dip was our family favorite – a Seven Layer Mexican Dip.

Throughout Joe Burrow’s National Championship season at LSU, I treated Dad to a dip each week to enjoy while watching the game. We enjoyed some of our old favorites, which include Cream Cheese Rotel, Black-Eyed Pea Dip, and this Seven Layer wonder dip. I would think I made that dip for at least half of the games that season, and each one was devoured.

I can’t tell you the exact reason we love it so much, but it has always been a family favorite. Growing up, we hosted Christmas Eve at my parents’ house each year and enjoyed “party food” rather than a large meal. This dip was always on the table and was always a hit.

Since then, it’s my go to dip for gatherings, and I always bring home an empty tray. Maybe it’s the seasoned bean dip at the bottom. Maybe it’s the creamy sour cream and guacamole mixed together. Maybe it’s the salty Frito that holds up so well to a scoop full. Either way, it’s a must for game day.

In a small bowl, mix the bean dip and taco seasoning until combined. In a large tray or 9-inch by 13-inch Tupperware container, layer the bean mixture thinly on the bottom. In another small bowl, combine the sour cream and guacamole. Layer this mixture on top of the bean layer. Top with layers of the bag of shredded cheese, sliced tomatoes, black olives, and green onions. Cover the dip and chill before serving. Serve with Frito or Tostito Scoops.

All in the Family

‘Find the good and praise it’: Air Force veteran…