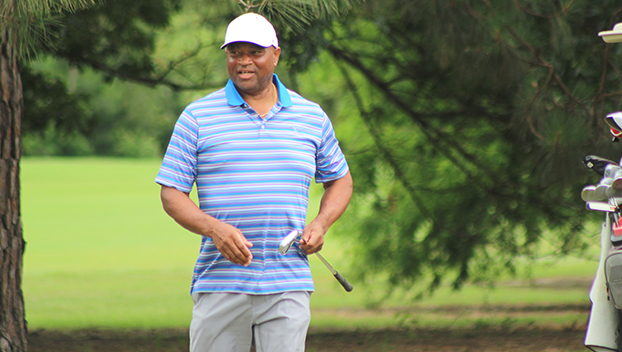 Ferriday native Nate Leonard has played golf for 30 years. Here he is pictured at The Natchez Open which is a pro-am tournament held at Duncan Park. He looks forward to competing in the tournament again this year and is working on improving his consistency three to four times a week. Each day of practice on the golf course lasts about four hours and he hits approximately 400 balls. (Hunter Cloud | The Natchez Democrat)

NATCHEZ — Ferriday native Nate Leonard takes three to four days a week to put in practice at Duncan Park. He spends about four hours in those sessions hitting about 400 balls, working on his swing technique and his short game at the putting green to become more consistent.

Duncan Park Golf Course is his home course and one where he found success this last year. In October 2021, he won the city’s senior championship outright. Previously, he had won his division but the 2021 tournament was his first overall championship.

After the first day, he found himself down by three strokes. Five holes into the round he was down by seven but he collected himself and battled back to win on the final hole. His playing partner Jimmy Moffett was tied with him on the final hole and missed his birdie and par putts.

“I made my par by hitting it center cup and won by one stroke. It was my first individual senior tournament win,” Leonard said. “It was a big boost for me. One of my goals was to win overall. It made me the best senior in Natchez, if there are any more who are better I wish they would come play. I enjoy the competition. It was a great feeling knowing the hard work I had put in had paid off. I thank God for the win. I asked him for one hole to win it.”

The back nine at Duncan Park was a little bumpy that day and other golfers were frustrated, he said. His approach to the game was to stay patient. While most tournaments he plays in he feels anxious or jittery before playing from the pressure, he recalls feeling relaxed that day.

Golf is a game of consistency and precision. He is getting in shape for the upcoming golf season by honing in his short iron game. While some younger golfers have a great long game driving the ball 300 yards off the tee, he relies on his short game to make up for driving the ball at max 270 yards.

Off the course, he watches the pros like Rory Mcllroy, Tiger Woods and Phil Mickelson to get in depth instruction. He has more time to watch and play golf now he is retired. It is a sport that has no true offseason although in the spring he tees off a new “season.” with the Natchez Open and other local tournaments.

Thirty years ago, his brother came back home on leave from his military service. As Leonard helped unpack the car, he found a golf bag in the trunk.

“I told him I always wanted to play golf. He bought me my first set of clubs for my birthday soon after,” Leonard said. “Ever since then, I have been putting a lot of time into the game. Mr Eddie West helped me out tremendously. I’m starting to reap the benefits now. Ten to 15 years ago is when I really started learning the facets of the game.”

West has helped teach golfers how to play the game. With Leonard, he helped him work on his grip and ball positioning. He is a golfer who is happy to help others learn how to play the game. Don Johnson also helped Leonard when he started playing. It is why he helps younger golfers now, he said.

“I asked him what I owed him and he asked me to help others,” Leonard said. “Anyone who is willing to learn I will help them out. They have to put in the work.”

Leonard carries his clubs with him everywhere he goes. Even on vacations, he takes his clubs so he can play. Now he is retired, it will give him more time to branch out and play courses. Golf can be a frustrating and challenging game, it can also be a relaxing game, he said.

“The peacefulness and the landscape is relaxing. You can come out and enjoy nature while playing,” Leonard said. “You can also be problem solving also. It gives you time to think and figure things out within the game of golf and outside of it. It is one of the best games ever played. It is mostly individual and learning about yourself.”