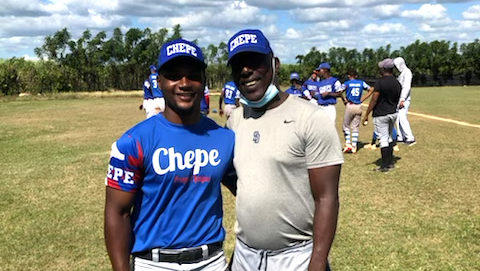 Alcorn State baseball player Clayvonjae Wright with his coach Chepe in the Dominican Republic. He will start his college season this Friday with Alcorn State University. (Submitted Photo)

LORMAN, Miss. – First-year head coach and the Alcorn State Baseball team readies to open the 2022 season as they travel to Lake Charles, La., to take on McNeese State in a four-game series. The first game is set for Friday, Feb. 25 at 6 p.m. with a doubleheader on Saturday at 1 p.m. and a single game on Sunday at 2 p.m. inside the Joe Miller Ballpark.

This weekend, all four games will have live stats available on the McNeese Sports website.

At the plate, Tyler Daniels returns to the Braves lineup. During the 2021 season, he played and started in 28 games with a .278 batting average for 27 hits (three doubles and one triple), 14 ribbies, and 15 runs.

Reginald Williams begins his first season as head coach at Alcorn State. He comes to the Braves after spending four years in the Cincinnati Reds organization, where he recently served as the development coach for the teams’ Class A club, the Daytona Tortugas.

ASU finished the 2021 season 7-20 overall and 6-16 in the Southwestern Athletic Conference, including a bid in the SWAC Championship tournament. On day two of the event, the Braves defeated Alabama State 3-2 to keep the dream going. The run to the title ended against eventual 2021 SWAC Champions Southern University, 10-4, on day three.