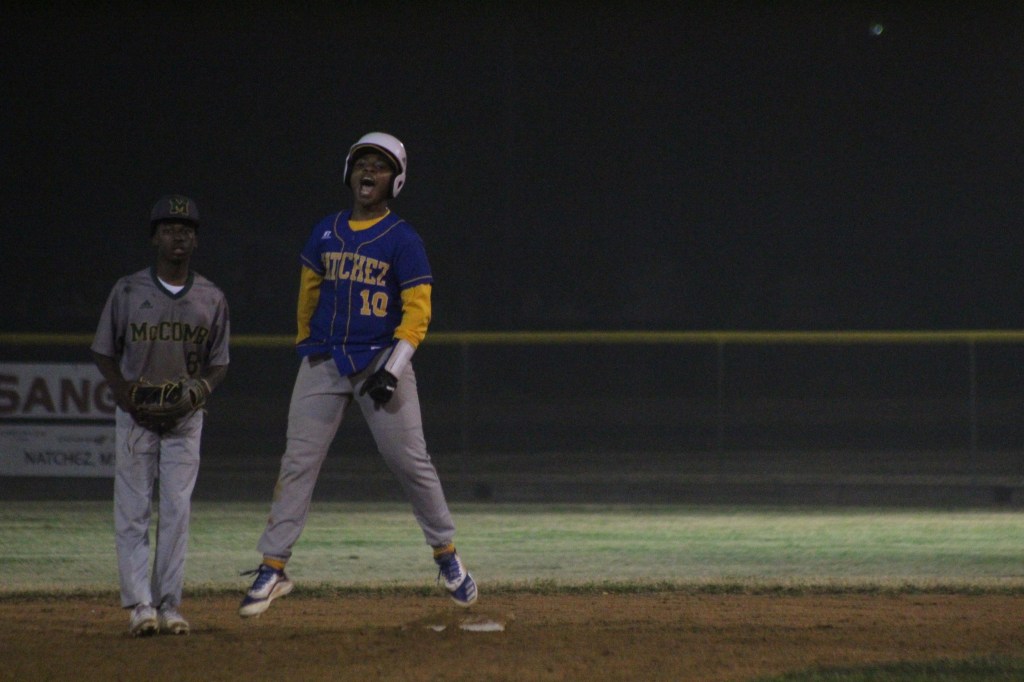 Natchez eighth grader Mason Bouldin celebrates a double in the fifth inning. Head Coach Dan Smith told him if he got a hit in the at-bat he would start first base the rest of the season. He had three hits and three RBIs in Natchez's 15-12 loss to McComb Thursday night. (Hunter Cloud | The Natchez Democrat)

NATCHEZ — McComb hung on to win 15-12 over Natchez Thursday night despite a spirited Bulldog comeback. Senior Rodrick Simpson was called out on a close play at first to end the game. He represented the tying run.

Natchez was in a position to come back after being down 9-1 because a few eighth-graders stepped up. Mason Bouldin had three hits and three RBIs in the loss and stepped up at first base.

“It was great being in eighth grade and stepping up on varsity. I was waiting on them to call my number,” Bouldin said. “Coach Campbell told me I was capable of anything. He believed in me. He said to wait until it’s time for you to go in and handle business.”

He started off the seventh inning with a single to right field to score a run and move the runners up with two strikes in the count. He hit the first pitch he saw in the fifth inning into the left-field corner for a two-run double.

Natchez Head Coach Dan Smith told him before the at-bat, “If he got a hit, he would start him at first base the rest of the season.” Smith’s words sparked a fire inside of Bouldin.

“I ran up to the batter’s box I was ready to hit,” Bouldin said. “I almost put it over 285. It felt great to get that. Everybody was hype for me. It felt good. I could hear them from second, it was so loud.”

One of the youngest players on the squad, Bouldin felt the night was one where he showed his growth from a seventh-grader last year. He had practiced hard and put in work over the summer.

Playing baseball as an eighth-grader is a fun experience, he said.

“My dad told me, ‘Be ready this year. You are the man. You are the best.’ I believe,” Bouldin said. “It’s fun playing. All you have to do is not be scared of the ball. You can do anything.”

As a team, Natchez is a work in progress. They lost four pitchers to graduation and their player of the year transferred to Adams County Christian School.

The Bulldogs have one senior, a couple of juniors, and sophomores, but everyone else is either a freshman or eighth-grader. It shows in their play as they had a hard time putting together the tiny things Thursday night against McComb.

While the Tigers committed one error, Natchez had eight errors. Natchez did not have as successful of a night on the basepaths as they did in the first game of the doubleheader. They stole a base nine times against McComb.