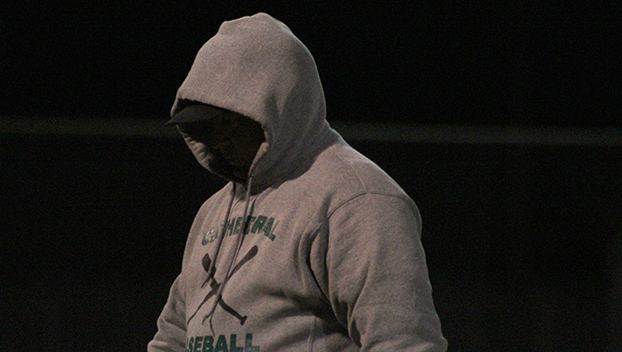 Cathedral head coach Craig Beesley is frustrated with his team after they lost 7-6 to Porters Chapel Friday night. It is the third one-run game they have lost this season. He said his team needs to compete so they aren't in a situation of being in a tight game. (Hunter Cloud | The Natchez Democrat)

NATCHEZ — Cathedral had the tying run 90 feet away down 7-6 to Porters Chapel in the bottom of the seventh inning Friday night. Jake Harriston made contact with a 3-1 pitch and fouled it behind the plate, where it was caught ending the Green Wave’s comeback bid.

Senior Paxton Junkin came off the field yelling and slammed his helmet against the wooden bench in the dugout. It was a frustrating loss and the third time Cathedral has lost a game by one run this season.

Head Coach Craig Beesley and his assistant coach and son Andrew Beesley felt the squad didn’t show up to play. Cathedral made six errors in the game and trailed 7-0 after the first two innings.

“We have lost three one-run games. We don’t compete in these types of games or situations,” Craig said. “We are trying to get these guys to realize how important these games are.”

Andrew said the team left 15 runners on base with several in scoring positions. Cathedral had the bases loaded in the bottom of the sixth, but Tanner Wimberly went down swinging to end the inning.

Cathedral won five games to start with 65 runs scored and yielding 15 runs. They gave Franklin County a chance Thursday night but hung on to win 16-10. Even in those wins, Andrew saw the same problem his dad sees with the team.

“We don’t compete and haven’t competed all year,” Andrew said. “We just beat people. We go through the motions. Someone has to step up and be a leader.”

Who that leader could be is yet to be answered. Jackson Navarro had a big double in the fourth inning for the Green Wave and had three RBIs on two hits against Porters Chapel.

Tanner Wimberly had three hits in four plate appearances Friday night, and he leads the team with a .552 batting average. Noah Russ has pitched 17.2 innings, struck out 25 batters, and has an ERA of 1.189. Catcher Zeke Flattman leads the team in fielding percentage and has 63 putouts on the year. Craig said the kids would rally around someone.

“We are looking for someone who wants to be at the plate in a close game or have the ball hit to them,” Craig said. “We hope we can turn it around, and one of these kids will do so. We will rally around someone. If you compete, you will put pressure on a team, and pressure causes mistakes, which creates opportunities.”

They will take the field next in an away game against Natchez High School at Chester Willis Field. The first pitch is at 6 p.m. Tuesday.

“Every game is a big game for us,” Craig said. “We have to take advantage of every opportunity we get offensively. We can’t leave 15-16 runners on base and expect to win.”

Merryville blocks Delta Charter from advancing in playoffs, ‘They…