Proud to Take a Stand Monument rededication Monday at 5:30 p.m. 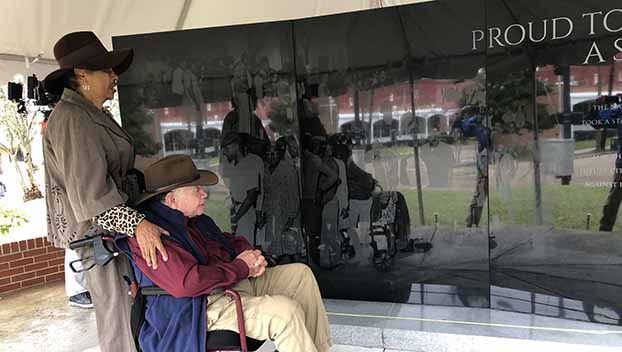 Natchez Mayor Darryl Grennell's parents Renza and Jonathan Grennell look at the Proud to Take a Stand monument shortly after it was installed. (Ben Hillyer / The Natchez Democrat)

NATCHEZ — The city will rededicate the Proud to Take a Stand Monument at the corner of Jefferson and Canal streets near the City Auditorium on Monday at 5:30 p.m.

Originally dedicated in 2019, the monument honors those who were affected by the Parchman Ordeal of October 1965 and is “the only permanent structure dedicated to this very somber yet important part of our civil rights history,” said Natchez Mayor Dan Gibson.

Former Mississippi Gov. Phil Bryant and former Natchez Mayor Darryl Washington Grennell, both of whom were instrumental in making the monument a reality, will attend, Gibson said.

The monument and the area surrounding it have been recently improved by adding new lighting, landscaping, interpretive panels and additional names of people involved in the Parchman Ordeal to the monument.

City staff worked hard to have the additions and improvements completed to allow for the rededication to take place during Black History Month.

“Please join us as we honor those who fought for equality and justice,” Gibson said.