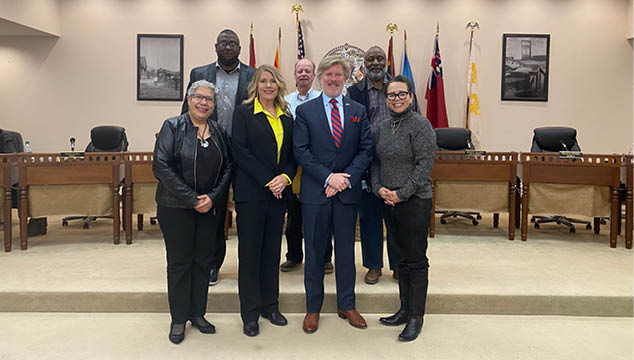 NATCHEZ — The Natchez Mayor and Board of Aldermen appointed LLJuna Grennell-Weir to the Natchez-Adams School District Board of Education this morning in a special meeting.

Grennell-Weir replaces Thelma Newsome, who is retiring after having served on the school board for the last 15 years.

The vote to appoint Grennell-Weir to the school board was unanimous. Alderwoman Felicia Bridgewater-Irving was absent from Monday’s meeting, therefore did not vote on the appointment.

Grennell-Weir is an eighth generation Natchezian, the daughter of Renza Johnson Grennell and the late Jonathan Grennell Jr. Grennell-Weir is one of six children, all of whom were products of the Natchez-Adams School District. She is the sister of former Natchez Mayor Darryl Grennell.

“I think I can make a significant impact in our school district,” Grennell-Weir said.

She is a graduate of Alcorn State University, where she works now as director of educational equity and inclusion and Title IX.

Alderman Billie Joe Frazier said Grennell-Weir “comes from an outstanding family in our community and she is well-versed in education.”

“I think this is an exceptional curriculum vitae. It is eclectic, well-rounded in academic, social and economic background,” Hall said. “The character and experience and background you have in higher education,” will be valuable to the school board.

Grennell-Weir has held a variety of positions at Alcorn State, including interim director of intercollegiate athletics. She is a certified Title IX investigator and child protection investigator.

She is a member of Alpha Kappa Alpha Sorority Inc., Zeta Delta Omega chapter, is a member of Zion Chapel AME Church, the NAACP and the Association for the Preservation of Afro-American Culture.

She and her husband, Dante Weir, have two children: Jonathan Zerrell and Danyel Lillian.

Grennell-Weir’s term on the school board begins on March 1.