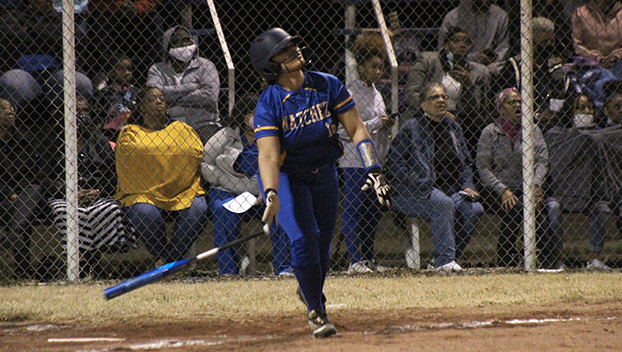 NATCHEZ — Lady Bulldog pitcher Camiyah Craft struck out three batters in three innings pitched to lead the Bulldogs to a 17-1 win. She had four RBIs on three hits in the Bulldogs beatdown on the Lady Rangers.

Aysia Pollard stepped up at the plate and delivered four hits, a home run and six RBIs. Pollard joked about why she had such a strong night at the plate.

“I got my contacts this time so I can see,” she said.

The Bulldogs had 13 hits, five triples and one double. They stole 10 bases and danced to victory in the bottom of the third inning. Raymond had just six hits and scored their only run in the second inning.

Craft is in her second season of pitching and said she shook off the run and kept on playing, as did the rest of the defense. She said she felt good on the mound.

“It’s my second year, and I’ve gotten faster and more accurate. Everything has been through God,” Craft said. “Aysia has helped me too. I’ve been here for two years, and she has shown me how to throw different pitches. I’m thankful for her so much.”

Her goal is to make a deep run in the playoffs. Pollard said they should be able to make a good playoff run.

The team has a lot more spirit this year and is better. Pollard said she is proud of her team and confident in their abilities. Already, they are talking a lot more on defense and how to cover the bases and base runners.

“We have better Chemistry on the field and better communication,” Pollard said. “We have improved, and with every practice, we get better. It’s important to communicate well. If you can’t communicate, the ball goes everywhere. You have to listen to your teammates, and the game goes better.”