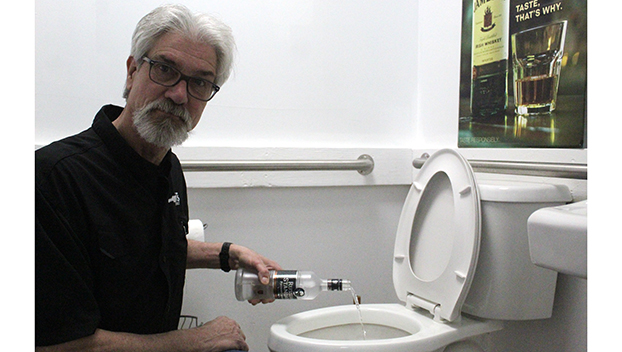 Spirits of Natchez manager Sam Jones pours a bottle of Russian Standard vodka in the toilet. He appeared in a Facebook video on the store’s page cleaning a toilet with the Russian Standard as part of a symbolic protest of the Russian invasion of Ukraine. Only two brands of Vodka sold at stores in the area come from Russia. Stolichnaya, grown in Russia but distilled in Latvia, and Russian Standard. (Hunter Cloud | The Natchez Democrat)

NATCHEZ — Spirits of Natchez manager Sam Jones had several ideas for ways the store could show support for Ukraine and poke at the Russian bear. One idea was to pull the Russian vodkas Russian Standard and Stolichnaya, grown in Russia but distilled in Latvia, and shoot the bottles.

Instead, he decided to pull the bottles off the shelves and use Russian Standard to clean the toilet in a video the store shared on Facebook. They have other ideas to support Ukraine in the works, he said. Right now, they want to send a message as they join a nationwide trend of liquor stores pulling Russian Vodka off their shelves.

“What we are doing is symbolic. It won’t be a drop in the bucket for anyone in Russia or Putin,” Jones said. “It at least shows everyone where we stand.”

“It costs us, but that is why I call it symbolic,” he said.

They are not the only Miss-Lou store pulling Russian vodka off their shelves. Hallelujah Spirits pulled Stolichnaya, which was the only Russian vodka they had. Other stores joining in the symbolic protest of Russian vodka are Hammers and McDonough’s package store.

Pat McDonough, owner of McDonough’s, said they wanted to join the national movement of liquor stores showing support for Ukraine.

“I had a customer ask us to pull the Russian vodka,” he said. “The girls called me either Friday or Thursday. They said someone had walked in and saw stores doing it on TV. They asked what I thought, and I told them it works for me.”

Davidson Package Store was not pulling any bottles off of their shelves, and 61 Wine and Spirits said they did not have any vodkas from Russia to pull.

JoJos and One-Stop Package managers were not available for comment Tuesday.

If you are a vodka fan, you still have plenty of options on the shelves. Jones said Smirnoff is one of the more Russian-sounding vodka names but is made in Illinois. Vodka comes from other countries like the Netherlands, France, Poland, Sweden, and the United States.

Currently, there is not any Vodka from Ukraine available in the Mississippi ABC warehouse, he said. There is another way people can show their support for Ukrainians during this conflict.

“We need to be praying for these people. They are being brave and courageous,” Jones said. “They need our prayers and our support in any way we can support them.”