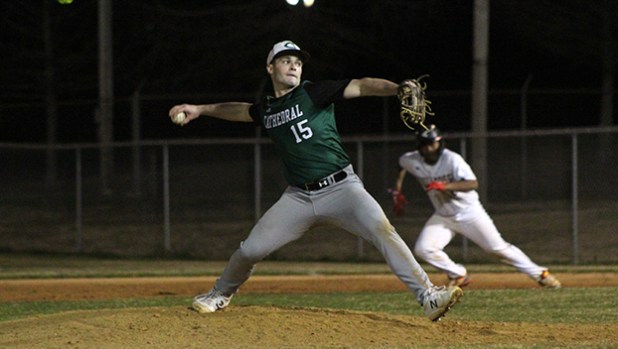 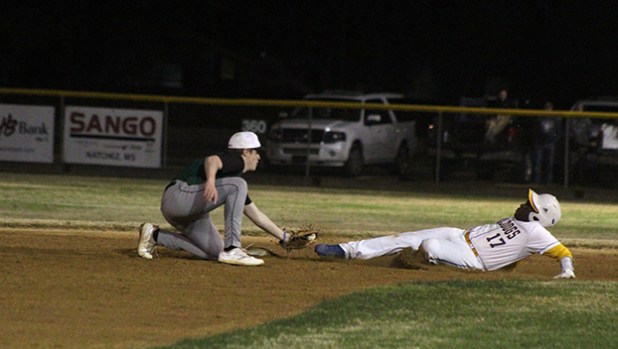 Natchez runner Jwun Mackey is thrown out at second on a perfect throw made by the catcher Zeke Flattman. He caught two runners stealing in the fourth inning to help Cathedral win 13-1 over Natchez. (Hunter Cloud | The Natchez Democrat)

NATCHEZ — Cathedral needed to make a statement after their loss to Porters Chapel last Friday. They did so Tuesday night with a 13-1 win over Natchez High School at Chester Willis Field.

Green Wave junior Mason Moore pitched four innings, struck out eight Bulldogs and gave up one run to earn the win. It was a needed start for the pitcher as Cathedral’s head coach Craig Beesley is concerned about his pitching staff’s workload.

Moore said he felt good on the mound.

“It is the best I’ve felt in a while pitching. I know I can throw strikes because my team is there to back me up if they hit it,” Moore said. “It felt smooth tonight. Everything felt smoother when I threw it. After basketball season ended, I started working a lot with band work, throwing and long tossing.”

Natchez did fight in the fourth inning with back-to-back singles by eighth-graders Jwun Mackey and Mason Bouldin. Natchez Head Coach Dan Smith said he has been on a roll lately and finished the game with two hits in two at-bats.

The Bulldogs could have extended the game, but the cannon arm of Zeke Flattman threw out two base-runners to get the Green Wave the win. Beesley said he felt Flattman did exceptionally well behind the plate and has improved tremendously in his strength.

He threw out Bulldog speedster Jaylin Davis by a quarter of an inch in the bottom of the fourth inning. Natchez did not steal a single base in the game.

Moore said it gave him confidence knowing his catcher had his back behind the plate. Natchez picked up on the fact he would hang his curveball but Flattman made sure it did not matter.

“He helped me out. It is the best feeling you can ever have,” Moore said. “You aren’t scared to throw one away. He can back you up if needed.”

Bulldogs struggle on the mound

Natchez struggled early to find the strike zone, and it made a difference in the game, Smith said. Bulldog pitchers issued nine walks, and the team made three errors.

“It got us in a hole, and it’s hard to fight out of a hole with young kids,” Smith said. “If we throw strikes we are in the game. If we don’t throw strikes, then we get behind. We go back to the drawing board and look to get back to winning against Bogue Chitto Friday.”

Playing with a purpose

Cathedral had a lot to prove after Beesley expressed his frustration with the squad’s performance last week. They were missing about six players due to a non-COVID illness, including their ace Noah Russ who was out for the game.

Beesley said he saw some kids trying to step up and be a leader but will wait to see what happens in a close game. He said they did do a better job of competing. Moore said they took the challenge to do better from Craig and Andrew Beesley last week to heart.

“We wanted to prove we could come out here and play,” Moore said. “We will show it in the next few weeks too.”