PRAYING FOR PEACE: Church rallies in prayer for Ukraine 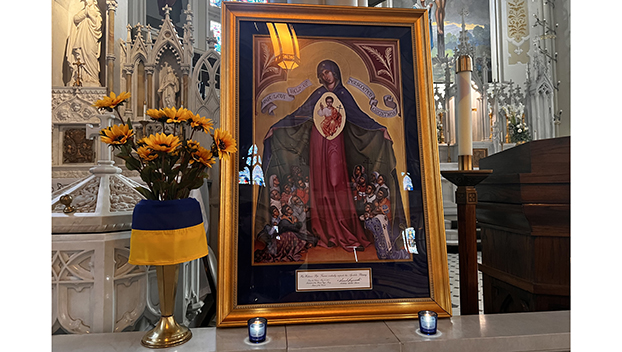 At St. Mary Basilica, a vase of Sunflowers—the national flower of Ukraine—wrapped in a yellow and blue flag rests next to a picture of Our Lady Help of Persecuted Christians, with people from a myriad of nationalities sitting under her cloak of protection. (Sabrina Robertson | The Natchez Democrat)

NATCHEZ — Churches in Natchez and across the country are engaging in prayers for peace as more than half a million people flee from Ukraine and others take shelter in basements and subway tunnels.

St. Mary Basilica in Natchez is sharing Pope Francis’s declaration of this Ash Wednesday being a day of fasting and prayer for peace in Ukraine as Russian forces close in on the capital city Kyiv.

In the sanctuary, a vase of sunflowers—the national flower of Ukraine—wrapped in a yellow and blue flag rests next to a picture of Our Lady Help of Persecuted Christians, with people from a myriad of nationalities sitting under her cloak of protection.

Rev. Mark Shoffner, parochial vicar of St. Mary Basilica said he placed the image in the sanctuary so that his flock would have something they can physically look at and be reminded that others are hurting and in need of their prayers.

The last few mass services have included collections for Eastern Europe as well as prayers for times of war and civil disturbance and for refugees and those in exile, he said.

Mary Lou McCall, a former news journalist who was on a mission trip in Ukraine in the 80s, would also speak after Tuesday mass.

Ukraine declared itself an independent country from Russia and the Soviet Union in 1991 while its people have the same ancestry as Russia.

“When I heard about what was going on I immediately thought of Caine killing Abel in Genesis—’your brother’s blood is crying out from the land,’” Shoffner said, quoting the scripture. “I thought about that and thought about it as another reason for people to look down on Christianity as far as Christians attacking Christians, whether it be in Ukraine or here in Natchez—undermining the faith.”

He added, “Fighting someone never accomplishes a good. It’s going to always denigrate the humanity of another person. That greed … destroys you and ends up making you lash out at others. It’s needless, but it can be useful because it can inspire people to pray, which is the most necessary thing to do.”

Shoffner said those who wish directly help those in Ukraine may give to one of the following.

Aid to the Church in Need: churchinneed.org