ACCS shows promise in their first tennis match of the season 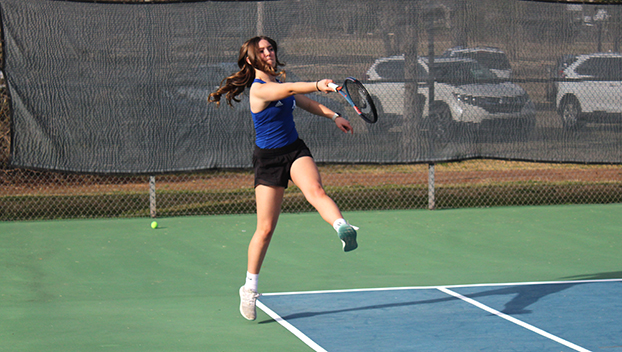 Alli Lyndsey hits a shot in her first match with the AC tennis team. She and her partner Claire Williams won their JV Girls doubles match 8-2. (Hunter Cloud | The Natchez Democrat)

Instead, the teams had some great competition on the court. Ava McDonald and Camren Strittman lost their first set 3-6 but won the second set 6-3 and the tiebreaker 10-7 to win their first No.1 doubles match and AC’s only court in varsity play. Junior Varsity Rebels won 3 out of the five courts.

“My team is getting stronger and stronger. My new players have come a long way since last year,” Gaston said. “My seniors Jeanie and Madi have grown into their roles. Ava and Camren have grown the most, and so has Vanderle Gaston.”

The Rebels have a short season, with the postseason beginning the week of April 11. Tennis teams across the state have a month and a half to play, she said.\

She wants to see her team come out, show up and play hard. They are ready for the season mentally and physically. There was excitement in the air as they warmed up.

AC has several promising young players this season. Claire Williams and Alli Lyndsey won their JV match against Central Hinds 8-2. This season is the first time Alli has ever played tennis. John Tyler Luneau and Maddox McDonald won their JV match 8-1. Luneau is a seventh-grader. He told the opponent numerous times not to be intimidated by him. “I’m just 12,” he said.

Gaston told one of her players to enjoy the game and not worry about winning as much. Her team has significantly gotten better, and she wants to see them continue their growth.

“I want them to keep this momentum. I love their love for this sport. It is making them better at every practice,” Gaston said. “I want to build confidence. We always want to go to state, but I think the priority in tennis is to be better with each game. If we can make progress, I’ll consider it a win.”