Former mayor: ‘It is important we tell this history’ 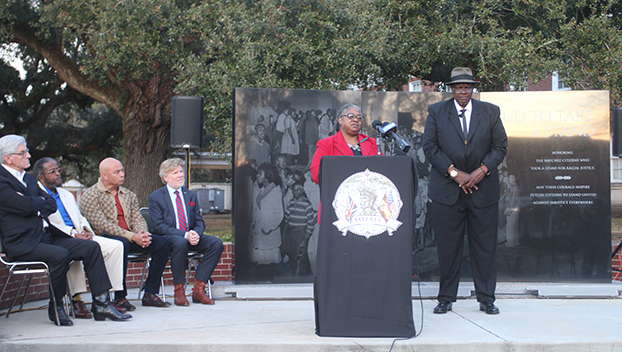 Denise Jackson Ford stands with her brother, Wharlest Jackson Jr., and addresses the crowd Monday night at the rededication of the Proud To Take A Stand monument. Ford and Jackson are the children of Wharlest Jackson Sr., the slain civil rights activist who died in a bombing after leaving his job at the Armstrong Tire and Rubber Co. in Natchez in 1967. No one was ever brought to justice for his killing. At left, former Mississippi Gov. Phil Bryant, Robert Pernell, former Natchez Mayor Darryl Grennell and Natchez Mayor Dan Gibson. (G. Mark LaFrancis | The Natchez Democrat)

NATCHEZ – Emotion-packed speeches and stirring song punctuated the chilly air Monday night at the “Proud to Take a Stand Monument” near the Natchez City Auditorium.

The occasion was the rededication of the monument, which was installed and dedicated in 2019 to honor and memorialize hundreds of Civil Rights advocates who were arrested in Natchez by law enforcement officers in 1965, including more than 150 who were forced to the Mississippi State Penitentiary in Parchman where they were abused, punished and humiliated.

Approximately 100 individuals and several dignitaries attended the rededication including former Mississippi Gov. Phil Bryant, and former mayors including Darryl Washington Grennell, whose administration spearheaded the establishment of the monument.

Mayor Dan Gibson was the master of ceremonies and presented keys to the city to Bryant, Grennell, Robert Pernell, who chaired the monument committee, and posthumously to Wharlest Jackson Sr., who was killed in a truck bombing linked to the Ku Klux Klan. Wharlest Sr. was an official in the NAACP in Natchez in 1967. His murderers have never been identified or arrested. Two of his children, Denise Jackson Ford and Wharlest Jackson Jr., accepted the honor in their father’s behalf.

“There’s a rich black American history here in the city of Natchez,” Grennell said. “It is important that we tell this history because history has a tendency to want to repeat itself. And if we know our history, we can do things to prevent those tumultuous facets of history from taking place. Again, it is important that our young people know this history so that they can stop the senseless violence that is taking place in this community and other communities.”

Bryant reflected on the imprisonment of those taken to Parchman. “These brave children and their parents and their grandparents stood against oppression and injustice knowing that their very lives could be taken, being put on a bus for four hours in that cold dark October night to be taken to the state penitentiary …  what bravery did it take? I’ve seen bravery in my time, and I know that it is often to overcome fear and to simply do the right thing.”

Bryant was responsible for the city receiving a large share of the cost to complete the monument. The city and local donors also helped fund the project. Bryant added, “I was shaken to hear what had happened that October of 1965. See, sometimes we had tried to hide those things and not talk about them in public. Oh, we didn’t wanna say that. (But) nearly 400 of our citizens had been illegally arrested and detained and … that terrorists had had threatened their lives, and taken the life of Mr. Jackson. No, we didn’t want to talk about that anymore. But we must.”

Bryant said, “As I looked at the faces of those on this monument, I thought what horrors they must have faced that evening and evenings before and thereafter.

“I want to remind you of a prayer that was spoken at our nation’s great monument to the great emancipator,” said Gibson. “On August 28th, 1963, Dr. Martin Luther king Jr. Spoke to thousands in front of the Lincoln Memorial and included in that speech was a prayer for Mississippi, a prayer for Mississippi that lasted only 18 seconds and was comprised of only 36 words. And it went something like this. ‘I have a dream that one day, even in Mississippi, a state sweltering with hate, a state sweltering within injustice, a transformation will take place, an oasis of freedom and justice.’ I believe that I stand here today as a recipient of that dream, a prayer spoken even before I was born because truly change is going to come, and change has come. We are now living the dream.”

In paying tribute to the late Wharlest Jackson Sr., the mayor said, “Fifty-five years ago at 8 p.m. on Feb. 27, 1967, an explosion rocked Natchez. And for many in our community, life would never be the same. On his way home from work, just six blocks from Armstrong Rubber and Tire Company where he had worked for 12 years, Wharlest Jackson Sr. turned on his blinker on Minor Street (where he lived). This simple action triggered a bomb mounted to the frame under the driver’s side of his 1958 Chevrolet pickup truck. The result was immediate killing of Mr. Jackson, and leaving to grieve his memory his wife Exerlina and his five children …”

Gibson said, “As we reflect upon this history, we must realize it is American history that affects us all. Lest we forget, we should go the extra mile to remember those both black and white who work so hard so that Natchez could eventually become the place we know and love today … a city of unity, community and opportunity … a city of peace and love.”

Both Denise Jackson Ford and Wharlest Jackson Jr. gave their thoughts about the tribute. “I not only honor my mother, but we stand here and we honor those (names on the monument) that we know of and the ones that we do not know. I want thank the mayor, and our former mayor Darryl Washington Grennell for his insight in making this monument. And we pray that it would be a lasting impression, not just for us, but for our children.”

Wharlest Jr. said, “I want you to know that the hand of God is also working in this world and this time to bring about justice. And because he is a just God and a just God he is, and he’s also a God of love. Amen. He is my mother’s and my father’s God. My father, along with many other civil right workers, could not have done what they did without God having their back.”

Following the speeches and presentations, the mayor encouraged all to join hands and sing “We Shall Overcome.” Musical selections were provided by Montrell Greene.

The monument was rededicated after nine new names were added, as well as professional lighting and landscaping.