All eyes on the final court, Bulldogs beat Bobcats in thriller 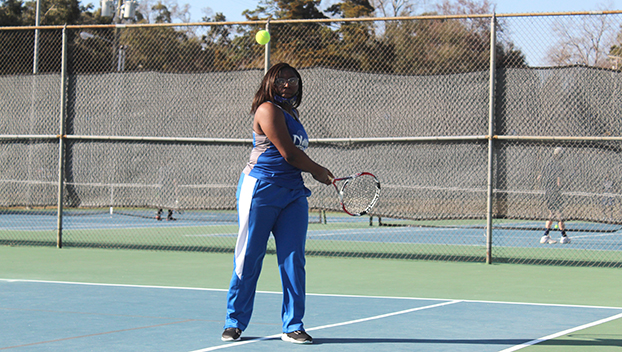 Samaria Spears returns a volley in the Bulldogs match with Bogue Chitto. Her and her doubles partner Alexis Woods won the final court to give Natchez a 4-3 win over Bogue Chitto Thursday to start the season. (Hunter Cloud | The Natchez Democrat)

NATCHEZ — All eyes were on the ladies’ doubles court where Natchez’s Samaria Spears and Alexis Woods were locked in a fierce battle with their Bogue Chitto opponents. The court would determine the winner of the varsity match as Bogue Chitto and Natchez were tied 3-3.

Spears and Woods took the first set on the court 7-6 by winning a tiebreaker. Their second set was tied 5-5 when they became the final court in action. Woods said she could feel the attention shift to them as they scratched out a 7-5 win in the second set, and win the match for Natchez 4-3.

“I got a little nervous. Everyone stood around and watched us finish,” Woods said. “We are two of the few veterans left. There was a lot of pressure, but we had to set an example for the people who just got here. I was talking to my mom before the match. She told me I would win, and that is all I thought. ‘I’m going to win. There is no not winning.’…It feels empowering to get the win.”

The pair have played together for two and a half years at Natchez. Woods said she has to rely on Spears when she has to play net because she isn’t as strong of a net player. Spears said she relies on Woods to talk through the games.

Together they have good chemistry and communicate well throughout the game. Head Coach Delores Whitley told them they had to win the court, they said. Spears said they made some mistakes but were able to talk through it.

“We did it for the team,” Spears said. “I find it hard to keep the ball in the court and stay consistent. It is a mental sport as well. I told myself to take it one point at a time, and it got us through the match today.”

Back with a vengeance

On another court at Duncan Park, Kahari McNeal was in fierce competition with Bobcat Jax Leggett. McNeal said he got a little frustrated after Leggett made a comeback in the first set but regrouped to win 6-4. He would win the second set 6-2 to take the court for the Bulldogs.

“It feels good to get the win. I got a little frustrated, but I got the win,” McNeal said. “I wasn’t hitting the ball the way I wanted to. I had a 5-2 lead on Leggett, and he got in my head a little bit. I was a little scared to slice the ball back. When I started slicing the ball, it got me the lead back.”

McNeal won a crucial court for the Bulldogs to start the 2022 Tennis season. He is playing for the first time in singles this year. Last season, he played doubles for Natchez and spent a lot of time out on the tennis courts at Duncan Park over the summer.

He said he worked on driving the ball. It showed in his game today. Last season did not go as well as he hoped. After a strong season, they fell short of reaching state in the district. His goal for this year is to make a run for state.

This year will be the first year Kahari has played tennis without his sister Kelsey McNeal on the court. He said she would support him. She is his number one fan, and so is his mom. Another change for him is playing singles because there is a lot more running, and all the pressure is on him.

“You have to depend on yourself. You have to keep yourself calm and steady,” Kahari said. “It is just a mind thing. You might be frustrated, but you have to slow your game down and start winning the little things and points.”

ACCS shows promise in their first tennis match of…